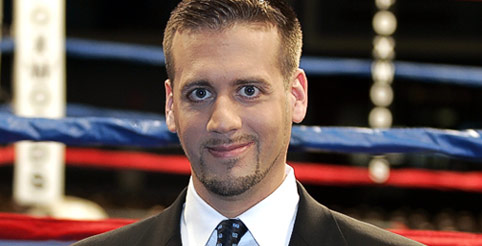 Now, we all know that the heavyweight division isn’t the most exciting division in boxing and it certainly isn’t the attention grabbing, headline making division it once was. The heavyweight division was once showcased on primetime network TV and its fighters were the kind of household names associated with today’s NBA, MLB and NFL players  — perhaps even bigger (figuratively not literally). The kind of attention the heavyweights garnered “back in the day” was equivalent to super models walking by a construction site. Today’s heavyweights are more like your friend’s girlfriend trying to get attention for her healthy Vegan cupcakes during the Super Bowl.

Personally, I don’t care all that much. It’s not for lack of being a patriot, but more so because of the fact I have always been more compelled by the little guys. That said, I understand the mainstream appeal of two big guys scrapping and the bombs they unleash upon each other.

So what’s the answer? How can the discrepancy of American heavyweight talent change? Some suggest it can’t and others with a more optimistic approach would offer up names like Seth Mitchell, Bryant Jennings and Deontay Wilder.

Max Kellerman suggested in an interview with Thaboxingvoice’s Victor Salazar that boxing must start utilizing young football hopefuls in hopes of curving the talent towards boxing and away from the NFL.

“If anyone’s serious about the American heavyweight division somebody’s got to go to the football factories and grab these [junior high] kids as they’re walking onto the football field – not high school or college. You have to see which ones have the temperament and the kind of personalities to make it through the gym.

“If you start recruiting football players at a young enough age — can’t be when they’re already 20 years old, it has to be when they’re 12 years old — then the ones that are weeded out and tough enough to survive the boxing culture then by the time they’re 20-22 years old we’ll have the best heavyweights in the world again,” Kellerman said in an interview that can be found on Thaboxingvoice’s YouTube channel.

Max also acknowledged that even in today’s climate the heavyweight title was still being challenged for by two Americans, but it’s being done on the gridiron.

“The fact is the heavyweight championship of the world is still contested on network television here in America, but it’s on the blind side of the quarterback. It’s when the best defensive-end is trying to get around the best left tackle, that’s the heavyweight championship of the world and that’s Frazier and Foreman. They just all play in the NFL now.”

It isn’t the first time that rationality has been proposed, but it is certainly interesting. Before dwelling into that aspect of things, let’s explore Thomas Hauser’s thoughts on the subject. At full disclosure the Hauser interview was done after getting Max’s thoughts and Hauser was able to respond to them as well as providing some insight of his own. Hauser dismissed Max’s proposal, not because of its theoretical competency, but more so because of its realistic validity.

“I don’t think we’re going to recruit 12 year old football players. If you’re 12 and can play football then what do you want to get punched in the face for? There are hundreds of football players in the NFL that make over a million dollars a year, there are a tiny handful of professional fighters that make that,” Hauser said.

The pay scale is an interesting notion and one I believe is up for debate. Hauser added on to the benefactors of being a young football player as opposed to a young fighter.

“You play football in high school you’re a hero, you play football in college and you can have 100,000 people in the stands cheering for you. If you fight in high school you won’t get that sort of following. So the adulation isn’t there when you’re [a young fighter] and you don’t really see that many role models on TV [in boxing], whereas in the autumn and early winter you can’t miss football on TV. Boxing doesn’t have the same cache in the United States that it once did and it doesn’t just affect the heavyweights.”

This is a valid point and although Max made it clear that it boxing should recruit at the junior high age it stands to reason that the 12 year old football player realizes what’s in store for him if he lands a Division-1 scholarship. But only cynics complain and contradict without providing a positive analysis and Hauser offered up his theory for a better future for the heavyweight division.

“It’s not a question of recruiting young guys out of the football factories, I think what we really have to do is improve the amateur system so that there is better training/coaching.”

While Hauser’s suggestion is a bit more cliché and typical, it is also valid and speaks volume for other issues that plague boxing. However, it isn’t a suggestion that grabs people and after all it is the “big ideas” that sucker people in, though in all fairness the answer to boxing’s dilemmas are probably as complicated as string theory.

“Also, one of the things that has had a trickledown effect which has hurt boxing terribly is there are no more recognizable champions — I say no more but there are a handful, maybe 2 or 3. The purpose of every sport is to crown a champion. The kid who plays basketball doesn’t dream of playing point-guard for a sub 500 team or maybe winning the division, he’s dreaming of hitting the game winning basket in the NBA championship finals.

“In boxing there are so many sanctioning bodies and so many weight classes that people don’t know who the champions are. Do you hear somebody say ‘the New York Giants won the Super Bowl last year, but maybe they’ll give that title up because they’ll play Green Bay for the diamond Super Bowl championship,’ that’s what’s killing boxing. ”

Hauser also spoke about the fact that not only is today’s boxing champions in abundance, but they compete on a platform that isn’t as accessible as that of a major American sport.

Again, Hauser provides another valid point. So what is the answer? I’m not sure there really is one, or at least one that is feasible. Upon further review there are holes in any real explanation or solution anyone could possibly provide, even that of the most highly respected experts such as Kellerman and Hauser.

I wouldn’t dare try and offer up a resolution of my own because I doubt anything I could fathom would be practicable and I lack the years and knowledge these two men have obtained over the years. So instead I’ll try to reason with any 12 year olds with the potential of being the next great American heavyweight.

Understand that while the pay scale is a bit off putting, it is a question of potential. True, the ratio of millionaire linemen in the NFL far surpass that of millionaire boxers in today’s world. However, the ceiling of what a linemen can make is apparent while the great American Heavyweight could have the potential of reaching an insurmountable amount of riches. Colts defensive end Dwight Freeney will make $19,035,000 this year, while Floyd Mayweather was guaranteed 32million for his fight with Cotto. That is more than the 30million guarantee Mike Tyson received in his 1997 fight with Evander Holyfield. If you take into account today’s scale versus that of 1997 as well as a heavyweight with Mayweather’s popularity then it is conceivable that Freeney’s 19 mil would be chump change.

Then there is popularity factor of it all. Hauser suggested that a junior high kid couldn’t possibly turn down a life as a football player for that of an amateur boxer because the football player is treated like a hero as early as high school as opposed to the amateur fighter who isn’t as glorified. But the amateur fighter has the potential to reach the Olympics and fight on a world stage. Having the support of an entire nation far surpasses that of a football town in West Texas.

It again comes down to the intent on reaching full potential. How many linemen in the NFL are household names? Well probably none and even if a general sports fan can rattle off a few names throughout history it still isn’t enough when you take it to the next level — crossover superstar. Mike Tyson, Joe Lewis, Joe Frazier, George Forman, and of course Muhammad Ali, these are all heavyweight fighters that extend beyond the realm of general sports fans and into the territory of mainstream superstar. I call this the “Grandma test” and that is how I gauge a person’s popularity. If my Grandma knows your name then you have made it as far as I’m concerned. My Grandma knows Ali and Tyson, but she couldn’t even guess what Jared Allen does. Maybe that barometer isn’t very official or scientific, but it is a good assessment of how far an individual has crossed over.

While there are more roster spots for potential linemen in the NFL compared to elite heavyweight fighters, it is the potential an athlete chooses to embark on that separates the two sports. It’s a matter of weighing the two options and aspiring for the road less traveled because after all becoming a superstar boxer is rarer, but it is also more rewarding.

The pantheon of greats is contested on a much more epic playing field. When you’re part of a team sport you understand that triumph is distributed and even at the highest level it is the quarterbacks, running backs and wide receivers that receive most of the mainstream attention.

An American heavyweight fighter is always on the cusp of greatness, the kind of greatness that transcends past the audience and into the spirit of America itself. When it comes time to decide, just remember your choices. There is no need to depict being a NFL linemen in a negative way, especially because that would be hard to do. Instead, just think about the potential in being a fighter. You can be a hero for an entire nation and possibly find world admiration like Ali did. Usually, the heroics of a team player are limited to the region of the team itself. If you’re a Detroit Lion than chances are your fan base won’t extend much outside the state lines of Michigan.

So if there are any 12 year old phenoms reading this do yourself a favor and strive for the kind of greatness that is limitless and be bounded by nothing but potential.