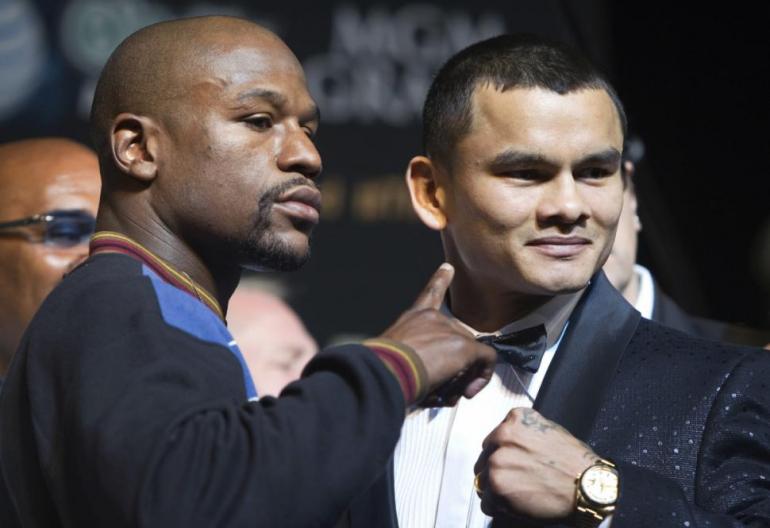 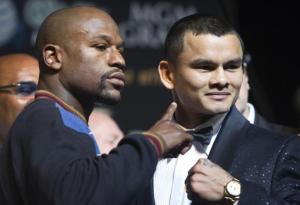 Floyd Mayweather will not allow out-of-the ring distractions to take away his focus as he gears up for his highly-anticipated rematch with Argentine assassin Marcos Maidana.

The boxing superstar has faced a tumultuous few weeks ahead of this Saturday night’s clash, live on BoxNation, following a distasteful pop from rapper 50 Cent at his reading ability before it was announced he was being sued by his former partner Shantel Jackson.

Michigan born Mayweather, speaking on the attack from 50 Cent, says he is unfazed by the distractions which have come his way and has put them aside in the lead up to his mega-showdown with Maidana.

“I’m truly blessed to be where I’m at. I try not to focus on that type of stuff. My job is to focus on my children, make sure my children and my family are in the best position, and stay focused upon my craft, which is boxing,” said Mayweather.

“Nothing can steer me the wrong way; I don’t focus on everything, it’s why I don’t focus on clown stuff. That’s for the circus. My job is to stay focused on boxing. I got to where I got to by being smart, making smart moves, and doing what’s best for Floyd Mayweather.

“I know what I can and I can’t do. You guys don’t know when you’re dealing with pay-per-view you have to read at least 60 to 70 teleprompters, and I don’t think they could choose a better person for the job than myself. I go out there and I do it with no problem.

“Making fun of a person because they can’t read is not funny – it’s tragic. If I really couldn’t read it would make my accomplishments even more amazing. I don’t know if 50 Cent is a boxing promoter, I don’t know if he’s making music – my focus is Floyd Mayweather,” he said.

The world’s number one pound-for-pound star was unexpectedly given his toughest fight in years when he stepped in the ring with knockout artist Maidana in May.

The bout saw the then WBA welterweight champion Maidana, with a record of 31 knockouts in his 35 wins, take the early rounds before Mayweather clawed it back on the scorecards to win on points.

However, it was the rough and rugged approach of the 31-year-old Maidana which threw the 11-time world champion of his gameplan and led him to voice his concerns over the refereeing by Tony Weeks, with the experienced Kenny Bayless stepping in for the rematch.

“The job of the referee is to be fair and not lean towards my side or not lean towards Maidana’s side. I’m pretty sure the last time Leonard [Ellerbe] and my team didn’t know that Robert Garcia was going to tell his guy to go out there and be extremely dirty,” he said.

“My health is more important than money or anything else. I have to be healthy to go out there and perform the way that I do, and I truly believe in having a career after the sport of boxing is over.

“I said this before in some of my past interviews, this is not the Internet, this is boxing. If you guys notice, I got tackled, the guy tried to knee me, I got a head butt, and there were rabbit punches, and there were low blows, and the list goes on and on.

Stepping into the ring with Maidana again will be only the second time in his professional career in which Mayweather has gone into a rematch.

The first time was successive back-to-back victories over the great Jose Luis Castillo in 2002, with the current WBA Super and WBC welterweight champion – who will also be defending his WBC light-middleweight title – looking to draw on that experience.

“I just have to go out there and just be me and be first. I can’t really say how the fight is going to play out, but I’m pretty sure he’s going to be once again extremely dirty and wild, and my job is to keep everything under control the best way that I can,” said Mayweather.

“With Castillo I already knew what he had done the first fight. But, with me the commentators persuade people to think a certain way. Put it on mute, put your TV on mute and watch the fight, you’ll look at the fight in a total different way.

“I can look at a fight and hear the commentators start saying certain things, and I’ll be like ‘what is he talking about, what is he watching’. So it’s the same situation with this rematch with Maidana,” he said.