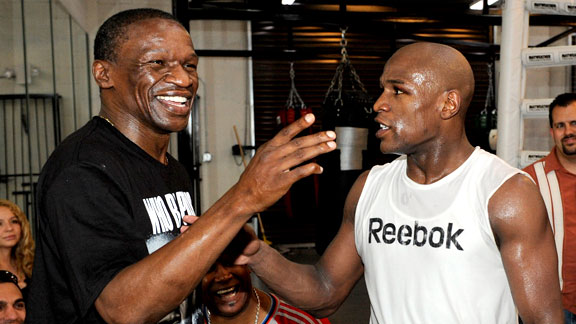 When Floyd Mayweather Jr. announced that he was fighting Saul ‘Canelo’ Alvarez via twitter, it created a buzz throughout the boxing world and through social media.  It was the fight the majority of fans wanted since Alvarez had beaten Austin Trout. It was certainly the more popular fight over a fight with guys like Devon Alexander, Danny Garcia, or Amir Khan. It was also a fight where Mayweather would have to move up in weight to Jr. Middleweight for, and seemingly the two fights Mayweather had above the welterweight limit were the fights some say were his toughest. Not only that, but for all intensive purposes, it is the biggest fight to be made in boxing and would also the freshest body that Mayweather has faced in a while.

Then the 152 lb catch weight came about. This writer here has no problems with the catch weight because in big fights like this, negotiations and stipulations are all a part of the process. To add to that, Mayweather doesn’t need Canelo because for the rest of his Showtime 6 fight deal, he could be fighting me and he will still get paid his guarantee, which is more than any boxer makes in a fight, and some make in their careers. But there are the fans that say Floyd is a hypocrite because of the jabs he threw at Manny Pacquiao, when it came to catchweights. For example, Floyd said he was fighting a common opponent in Miguel Cotto at his comfortable weight of 154 and not 145, two lbs below the welterweight limit when Cotto was a welterweight.

ThaBoxingVoice.com spoke with Mayweather’s head trainer and father, Floyd Mayweather Sr. last week on our radio show, and he spoke on the catch weight of 152 lbs.  “That’s not my idea because if it was up to me he’d be at 150 not 152. First of all, so far all of the advantages are to Canelo. Only thing he doesn’t have is the mind that Floyd has. At that night, smart guy is going to win and that’s Floyd,” explained Mayweather Sr.

Certainly there are some who feel Canelo should say the hell with the catch weight and come in at 154 because many don’t think Mayweather would walk away from a fight of this magnitude and from a payday rumored to be guaranteed at 41 million dollars, the day before the fight. Mayweather himself did the same thing, when he disregarded the catch weight of 144 when facing Juan Manuel Marquez and he paid Marquez an extra $600,000 in order for the fight to go on. Mayweather Sr. doesn’t think his son will walk away from the fight but feels Canelo knows better not to come in over 152 lbs.

“It aint my business, there is something to pay if he comes in over. If he’s 154, let me say this right here, if he’s 54, we might fight him at 54 but he (Canelo) might not have no money after the fight. He knows better not to be a pound over,” Mayweather Sr. stated.

But Mayweather Sr. doesn’t fear the power or the size of the younger Canelo because he just feels he has the better guy by far. “Canelo is the biggest guy Floyd fought so far but he’s not a threat. He might have power. But you got to be able to hit something for the power to be able to do something. We plan on him getting nothing off. We got a strategy that’s going to stop anything that he has.”

Sr. feels that Canelo has youth but feels he’s not that smart in the ring and that’s something the Mayweather camp will bank on come September 14th. “Canelo’s a young man; my son is old enough to be Canelo’s father. He’s got a lot of youth in there but it’s going to take more than youth, he needs a brain in boxing, you’re going to have to get in his head because right now, Floyd outsmarted all of them, this guy isn’t as smart as my son.”

For the full audio of this interview click here: http://thaboxingvoice.cogito24.com/mikey-garcia-vs-juan-manuel-lopez-preview/15201