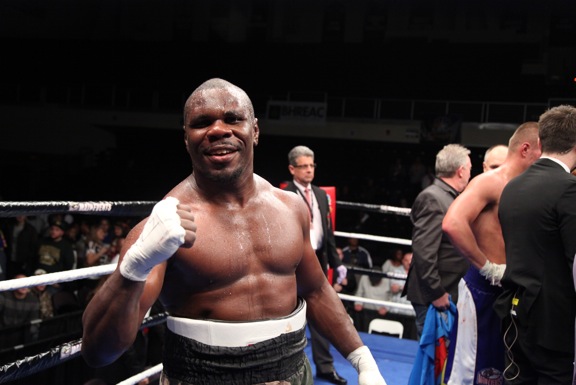 NBC Sports Group’s Fight Night presents its first afternoon broadcast of the year on NBC this Saturday, September 20th, at 3 p.m. ET. The fourth afternoon network boxing broadcast since the Fight Night series premiered in 2012, the show will feature a pair of spectacular bouts with four of the sport’s hottest prospects.
In the main event, South African heavy-hitter Thabiso “The Rock” Mchunu (16-1, 11 KOs) will battle unorthodox Garrett “The Ultimate Warrior” Wilson (13-7-1, 7 KOs) for the NABF Cruiserweight Title and, in the co-feature, undefeated Karl “Dynamite” Dargan (16-0, 8 KOs) will take on Angino “The Nightmare” Perez (16-5, 14 KOs) for the Junior NABF Lightweight Title.
NBC Sports Group’s Fight Night broadcast team of play-by-play announcer Kenny Rice, analyst B.J. Flores and ringside reporter Chris Mannix will call the action.
After scoring an upset over former heavyweight contender “Fast” Eddie Chambers in his Fight Night debut, Mchunu won by decision to capture the NABF Cruiserweight Title against highly-ranked Olanrewaju Durodola in his second Fight Night appearance. Mchunu is anxious to make the first defense of his title on NBC.
“Obviously, for any elite athlete it’s a huge privilege and honor to fight, and especially head up a fight card,” Mchunu said. “It’s really a dream come true. But such privileges come with the responsibility for myself as an athlete and fighter to deliver my best possible performance to all viewers and fight fans. I’ve done everything in my power to be ready to execute a masterful performance on the 20th of September.”
Mchunu’s powerful southpaw style will make for an explosive match against the unorthodox style of Garrett “The Ultimate Warrior” Wilson, who earned many fans in his crowd-pleasing Fight Night debut as a last-minute replacement for Tomasz Adamek against Vyacheslav “Czar” Glazkov nearly a year ago during the last afternoon edition of Fight Night on NBC. Excited to be back, the 32-year old Wilson said, “I love having a chance to perform in front of a national audience. This is a great opportunity to show my skills and my strength and give the fans a skillful and entertaining show.”
Kicking off the broadcast will be Fight Night veteran Karl “Dynamite” Dargan against Angino “The Nightmare” Perez in a ten-round battle for the Junior NABF Lightweight Title.
The undefeated Dargan, 29, made his Fight Night debut last November with a 10-round unanimous decision victory over Michael Brooks to capture the USBA Atlantic Coast Region Lightweight Title. After a thrilling knockout win on NBCSN in June, “Dynamite” looks to add a second regional belt to his collection on Saturday. Trained by his uncle, Naazim Richardson, the legendary trainer of Bernard Hopkins, Shane Mosely and Fight Night favorite Steve “USS” Cunningham, Dargan is a hot lightweight prospect on the rise. “I won my last belt on an NBC broadcast and I appreciate the exposure I get fighting on NBC,” Dargan said.
In order to achieve his goal, Dargan will face a formidable opponent in Angino “The Nightmare” Perez. A 31-year old native of Miami, FL Perez has a stellar 88% knockout-to-win ratio. Focused on scoring a major upset on a major platform, when asked about making his Fight Night debut Perez simply said, “This is the first appearance of many to come!”
“We are excited to present this card with two title bouts on a special afternoon edition of Fight Night on NBC,” said Gary Quinn, Vice President of Programming & Planning for NBC Sports Group.
Kathy Duva, CEO of Main Events, said, “These special afternoon editions of Fight Night on NBC are so important. It’s a chance for the fighters to make an impact on a huge audience that is not completely familiar with boxing. Both of these bouts will be very entertaining in the ring and that’s exactly what we need to keep turning casual viewers into big fans.”
Tweet