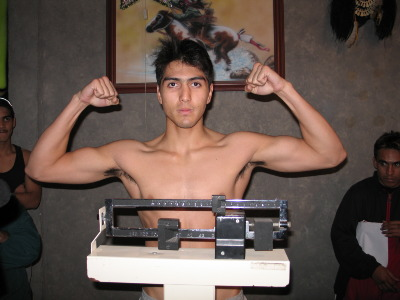 This past week, Junior Middleweight Michael Medina joined ThaBoxingVoice radio show. Discussing current changes and looking ahead to a March 1st match-up against Willie Nelson at the MGM Grand in Foxwoods.

He started by detailing his recent management change, moving to one of boxing’s more prominent managers, Steven Feder, head of Standing Eight Management.  “I started working with Steven Feder last year, we got together well and now we’re also working with Lou DiBella” said Medina.

Clearly Medina is at a significant turning point in his career adding the services of a notable manager and promoter. “I get fights and I get time to know when I’m going to fight,” Medina added.  “I have a variety of world champions that help me get prepared for my fights.’’

This may seem straight forward in the abstract but this provided a little insight to the significant impact of the team surrounding a fighter.

Medina is also now working with new trainer Eric Brown, out of the Wildcard Gym in Los Angeles. Medina is confident he is reaping the rewards of this new relationship with Brown who reputation and resume is rapidly growing amongst trainer circles. Brown’s success last year includes added a second division title to Paulie Malignaggi and helping Peter Quillin win his world title in the middleweight division. Medina hopes to learn and follow suit.

“ I’ve been improving so much, I’ve been learning a little bit more about the sweet science and that why I feel so comfortable, I feel that every day I go to the gym I come out with something new,” Medina said confidently.

“He doesn’t try to change a fighter; he works with what I’ve got.” “When a coach that you trust in believes in you, it brings out the best in you,” He added.

When discussing his upcoming fight with Willie Nelson, Medina played down the possibility that he was being fed to the younger, up and coming opponent, because despite being only 26 years old, Medina is by far the more experienced fighter.

“I’ve been in the ring with guys that are way tougher,” he said defiantly.  Medina also conceded the magnitude of the task at hand. “He’s probably going to be the toughest fight of my career now”.

With the recent changes behind the scenes, Medina will be trying to overcome his previous setbacks he suffered when stepping up in competition and grab a statement win to show he belongs and take bigger steps in his career.

For Full Audio of this interview click here: http://thaboxingvoice.cogito24.com/adrien-broner-vs-gavin-rees-recap-plus-michael-medina-michael-hunter-victor-castro/10158