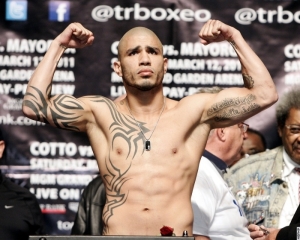 What’s the meaning of underdog? Underdog- (competition), a participant in a fight, conflict, or game who is not expected to win.

Underdog is a word seldom used or associated with a champion, much less with a proven champion; even more so less with one who is battle tested and one that’s a multiple division world champion in Miguel Cotto.

Unless you live the life of the Amish where there is no TV let alone electricity, you know Miguel Cotto has been given the task to carry the reigns of the past Puerto Rican champions to come before him names like Wilfredo Gómez who holds the record for most defenses in the super bantamweight division and for most successive knockouts by a titleholder.  He has carried the torch from Felix Trinidad who made 15 welterweight title defenses, two at 154 pounds, and he added a third world title when he wiped out William Joppy as a middleweight.

He’s carrying on the legacy of a Wilfred Benitez won world titles at 140, 147 and 154 pounds. His greatest victory was probably when he became the youngest-ever champ at 17 by outpointing the vastly more-experienced Antonio Cervantes in 1976. Benitez was unbeaten in 39 fights when Sugar Ray Leonard stopped him six seconds from the end of the 15th and final round for the welterweight title, but he came back to become a champion at junior middleweight

Still relevant enters in the current face of Boricua Boxing, Miguel Ángel Cotto Vázquez (born on October 29, 1980). Cotto is the reigning WBA (Super) Light Middleweight Champion. He is a four-time world champion in three weight divisions (light welterweight, welterweight and light middleweight).
These achievements alone are enough to make any boxer happy and ride off into the tropical island of Puerto Rico’s sunset and be applauded by his loving fans and country men, but like so very few Miguel Cotto dares once again to be great as he faces the biggest task of his career On May 5, 2012. Miguel Cotto is scheduled to face Floyd Mayweather, Jr. for Cotto’s WBA belt at 154 pounds at the MGM Grand Garden Arena in Las Vegas, Nevada.

Also at stake is Floyd Mayweather’s imaginary mythical title as the pound for pound paper-per- view king. He would also earn  bragging rights to say you are the first man to give the infamous “0” to a man who values the fact he is undefeated second only to the wads of money he talks into on HBO’s 24/7. Floyd Mayweather will be no easy feat to overcome on May 5th.  When you think of Floyd, the first thing to come to many is the arrogance, the brass fullness of himself but without a doubt when thinking of solely boxing; one most think greatness, a great technician.

In the words of Floyd Mayweather himself this is what he lives by “hard work and dedication” Floyd claims to train like no other; training at night because when he works (fights) on HBO PPV after ten o’clock at night so he trains and prepares his body for that.
This is what Miguel Cotto is up against.  He has found a union in his new trainer and what many of his fans hope is the secret weapon La mente maestra (the masterful mind). Many were shocked when Cotto parted ways with Manny Steward only to replace him with Pedro Luis Diaz Benitez (complete list of achievements http://www.fighthype.com/pages/content10929.html).

Pedro Diaz theory is no man is invincible and he believes that man only exisst in the movies. Life is no movie. Yet on May 5th, the MGM Grand Garden Arena in Las Vegas, Nevada will feel like the stage for a movie as HBO’s cameras will be rolling and the 4 24/7 episodes that have aired feel like trailers being released before the box office hit to come. Until that day Diaz continues to log all his records of every move his fighter Cotto makes taking both physical and scientific calculations to insure he produces the best Cotto on May 5th.

I’m happy with the induction of Sylvester Stallone into Boxing Hall of Fame.  One can’t help but associate real life boxing to those great Rocky films. What comes to my mind is the scene in Rocky 4 when Dolph Lundgren plays the part of Ivan Drago and he has all the wires hooked up to him and they’re checking every possible piece of data on his actions and blood etc.

Well seems much like what Pedro Diaz is trying to accomplish with Cotto in these past episodes of 24/7, only difference  is Rocky did beat Ivan Drago that night and Floyd Mayweather is no Rocky or should I say Rocky could never be or posses the skill and talent that Floyd Mayweather has.  One thing that Cotto does have is his new found will to win racking up the WBA championship and defending it twice successfully and even taking revenge on one of the losses of his career to Antonio Margarito. A man that the public believes cheated Cotto and cause permanent scar tissue to Cotto’s face that night. Scar tissue that can be a key element in this fight not going the distance if Floyd can land pot shot right hands all night like he’s done to so many others in the past.

Question will be can Miguel Cotto face hold up for 12 rounds versus the greatest to ever step in the Ring!? So Floyd Mayweather will have you believe Cotto didn’t lose that night because of this. So he’s a undefeated fighter because Floyd Mayweather feels Manny Pacquiao had Cotto come in to the ring weight drained the night of their fight,  so that lost on Cotto’s record is void.

One thing I think is this can all back fire on Floyd if Cotto starts believing his own hype and finds or keeps this new found confidence that he has along with the close knit team;  his new trainer, the union of having his mother and family at camp, and the mere fact that he has the country of Puerto Rico on his back along with the island of New York city and the millions of his fans around the world that will be tuned in on this Saturday night Miguel Cotto just may pull the upset on money May!