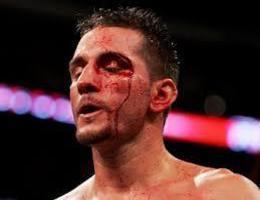 Sergio Mora is an obvious underdog in his fight with Daniel Jacobs this Saturday in the co-feature of the PBC on ESPN card, which features a welterweight showdown between Danny Garcia and Paulie Malignaggi.

However, Mora might be a bigger underdog than anyone realizes. Tha Boxing Voice has learned that Mora is dealing with an injured right knee, but has supposedly decided to continue with the fight. The injury isn’t significant enough to cause a cancelation, but multiple reports from people within the Mora camp and firsthand witnesses tell TBV that Mora is having a difficult time sustaining movement. This lack of mobility has affected his ability to train certain aspects for the fight.

There have been reports over Mora’s last few fights that he was dealing with a nagging leg injury, but it was never specified and Mora has never confirmed it. Tha Boxing Voice has reached out to the Mora team, but they have yet to give a statement.

Furthermore, it appears as though the Jacobs camp is aware of the weak knee of Mora. Members of the Jacobs camp say that they have received their own accounts of Mora’s leg issues, but they are unconfirmed at this time.