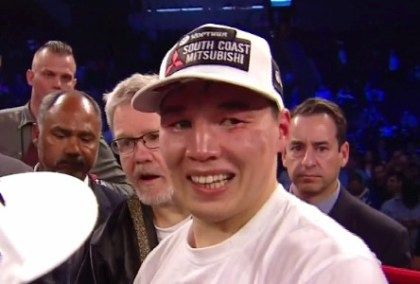 When the decision was read in frony of 6,218 people last Saturday night from the Barclays Center, not many people were expecting to hear “…and the new”, coming from Michael Buffer’s microphone. Ruslan Provodnikov certainly wasn’t one of those people that felt he lost the title to Chris Algieri.

After sending Algieri to the canvas twice in the 1st round, Algieri fought back and won a decision on the cards 114-112 twice, and 109-117. Provodnikov certainly upset with the decision, let his feelings known through his manager Vadim Kornilov. “Look at my face, look at his. I feel I won this fight but I have to respect the decision of the judges. They say I lost this fight but in my 3 losses I send guys to the hospital. It’s ok, I want a rematch.”

His trainer Freddie Roach was adamant on a rematch; he wanted the rematch in Las Vegas because Roach felt there may have been some home cooking as the two local judges scored it for Algieri. Provodnikov loves the Barclays Center and hopes to rematch Algieri in the same venue, with neutral judges.

“I love this place and want to keep fighting here. I know Freddie said he wants the rematch somewhere else but I’d come back and fight here, fight him here. We just need neutral judges. The one judge gave him 8 straight rounds after the 1st round, I don’t think that’s accurate,” explained Provodnikov.

Algieri adjusted and boxed well after he got knocked down twice in the 1st round. However, from ringside it seemed like the more thudding punches were coming from Provodnikov. Provodnikov made it clear on why he won the fight.

“Every time I hit him, I hurt him. You can’t win a fight by running and that’s what he did.”