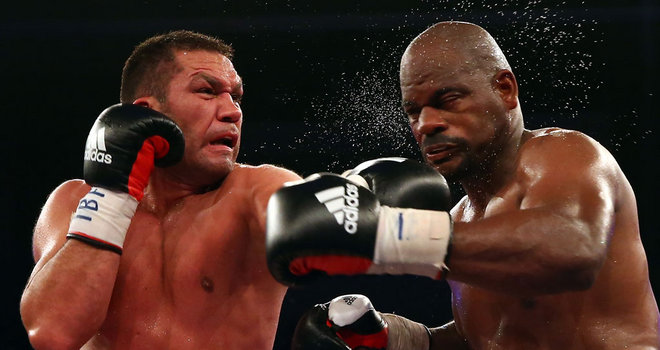 The IBF has ordered Wladimir Klitschko’s next title defense and the opponent is Bulgarian heavyweight Kubrat Pulev. The negotiations are underway and we can only hope the fight gets done sooner than possible, for no other reason than to wash away the image of the one-sided beat down Wladimir gave Alex Leapai on April 26, a fight which was televised on ESPN and ended in a 5th round TKO for Klitschko.

I expect Pulev (20-0, 11KOs) to make a better, more competitive fight out of it. I don’t believe he has the tools to get the win, but he has cemented his place within the heavyweight ranks and deserves this fight, at least by comparison to some of his predecessors.

Pulev was understandably overjoyed at the news, especially with it coming only days after his 33rd birthday, which he celebrated Sunday.

“That’s what I call a late birthday gift,” says Pulev. “I was ringside when Wladimir defended his belts a few weeks ago. It was a walk in the park for him against Leapai. When Klitschko meets me inside the ring, I will cause him real problems to say the least. I will show the fans worldwide that Klitschko is no invincible machine and fulfill my dream.”

Pulev secured the IBF mandatory spot in August 2013 with a win over Tony Thompson. After Klitschko, the WBO/WBA Super Champion and IBF World Champion, successfully completed his WBO mandatory against Alex Leapai on April 26, Pulev, the IBF’s mandatory challenger, is next in line.

Kalle Sauerland had this to say: ‘’The negotiations with Team Klitschko have already begun. We are excited to present a heavyweight bout in cooperation with K2, which is deserving of its ‘Heavyweight World Championship’ status.’’