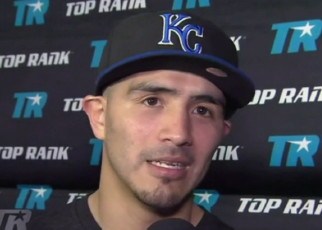 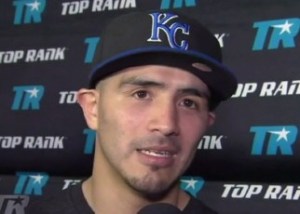 Brandon Rios is in Vegas to support his stable mate Marcos Maidana as he prepares to take on pound for pound king Floyd Mayweather tonight.

Rios was seen on television on Showtime’s All Access with his arm in a sling. Tha Boxing Voice was on hand and got a chance to speak with Rios, and we asked him about the injury. “Everything is great. It wasn’t bad I just sprained my arm. That was it. f**king around, that’s was happens. It is what it is. It’s nothing bad as you can see my hand is good,” Rios told us.

After coming off of his fouled fested disqualification victory over Diego Chaves, Rios is anxious to get back in the ring. One name that many people want to see him return against is the rugged Russian “Siberian Rocky” Ruslan Provodnikov, but there seems to be a snag in making that fight happen,” It’s not that I don’t want the fight. They want to pay me stupid money. I’m not too stupid to pay me stupid money for that fight. I don’t know why he wants to get paid stupid money. That’s a dangerous fight. I’m just waiting for what Cameron Dunkin has to say. We’ll make that fight no problem. I’d love that fight,” Rios explained.

Another name that would also make sense since the two had very entertaining wars is, Mike Alvarado. “Of course we’re still going to do that. It’s tied one to one. We got to do that,” Rios stated.

As was reported and seen on All Access, Rios’ former strength and conditioning coach Alex Ariza was spotted in Mayweather’s camp recently. Did that bother Rios? “No not really. It didn’t bother me. I just think that’s a scandalous move what he did, living in Oxnard and still doing that. It is what is. He has to look out for himself. I guess it just is what it is. What can we say?”