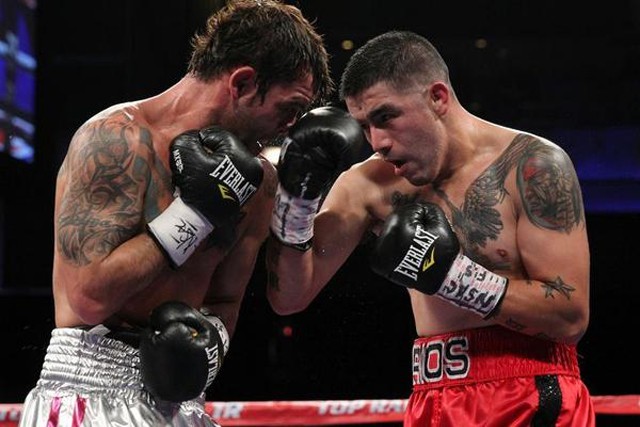 There was a lot of anticipation, excitement and questions for this one, Brandon “Bam Bam” Rios (31-2-1 22 KOs) was making his comeback fight after being destroyed eight months ago in Macau at the very fast hands of Manny Pacquiao but one thing was clear, his team didn’t give him an easy opponent in Argentine Diego Chaves (23-1, 19 KOs) who had only lost one fight previous, a highly competitive match against highly rated Keith Thurman, the real question mark being how fresh he would be after having a lot of Visa issues resulted in him only arriving in the States as late as Thursday.

Round 1
In most fights, the first round is one the fighters use as a feeling out process but not in this one. With Rios being out-boxed in his two losses, Chaves was expected to come out and try to do the same. He did start behind a nice left jab but that only last a few seconds before a brawl unfolded and despite this being where Rios is most comfortable fighting Chaves held his own early on, landing good clean shots, including a nice uppercut but with half a minute left he went down by a left hook though with the feet being tangled this was correctly ruled a slip. Great opening round, which was extremely difficult to score. I’m reluctantly going with Chaves due to him landing the cleaner shots but Rios looked like his strength would get to his opponent at some point.

Round 2
Chaves showed that he clearly had the better hand-speed as they went toe to toe again but Rios shots were the more solid out of the two fighters and with a minute remaining landed a hard right which caused the Argentine to hold momentarily.

Round 3
Rios landed the biggest shot of the fight so far, a huge left hook which Chaves did well to take, Chaves clearly feeling the ferocious early pace was holding a lot more and was eventually deducted a point for continuously clamping down on Rios arm.

Round 4
Chaves showed better movement in this round using his jab well and boxing, instead of engaging in a war. He landed some good combos, if he was smart he would fight the rest of the bout this way, keeping the distance like he did beautifully in this round would clearly be his best chance of being victorious.

Round 5
Robert Garcia sent “Bam Bam” out with the intentions of getting the fight back on the inside, he did so almost immediately but when Chaves got the better of the first exchange Rios swung him round and appeared to fling Chaves to the deck resulting in a harsh looking point deduction for him, this ruined his game plan and for the remainder of the round Chaves managed to successfully stay on the outside.

Round 6
Rios looking to get back into the fight did so In the first ten seconds of the sixth round with a huge right hand, Chavez held a lot early on in this round which made for frustrating viewing as it was clear that this wasn’t going to be the classic we had hoped for. You could argue either fighter could’ve had further point deductions, Chaves for excessive holding and Rios for an attempted intentional head-butt, which afterwards had both fighters mouthing off at each other whilst the referee gave them their warnings. This certainly excited the crowd, for the final minute Chaves was pot-shotting well enough to take the round.

Round 7
Rios forced the action better in this one, was Chaves taking a breather or had his less than ideal preparations started to catch up with him?

Round 8
Yet another point deduction by referee Vic Drakulich, who was getting far too involved then he needed to, this time it was against Chaves for what appeared to be punching in the clinch after being told to break. Rios, who was again forcing the action, did some good work on the inside.

Round 9
With two rounds remaining, this was as close as we thought it would be. A clumsy take-down by Chaves who dragged his opponent down whilst holding him by the head indicated to me that he was looking tired, this didn’t lead to a points deduction, which was surprising for this ref but when the fighters came together again Chaves held Rios in a headlock which angered the Californian based fighter who shouted expletives at Chaves and then the referee who was losing control just disqualified Chaves and with that the fight was over. Chaves looked confused, Rios looked angry and it was a shame because even though it was a messy fight the referee ruined the outcome, I had it 75-74 in favor of Rios with everything to fight for.

Despite Rios being awarded the win, he was clearly and understandably disappointed with the outcome. There are reports that Rios checked into hospital for a shoulder injury, dizziness (which was likely caused by the take-down) and a potential corneal abrasion.

It’s not clear where both fighters go from here, due to his lack of skills Rios would do well to steer clear of boxers but there are still plenty of exciting fights out there for him, perhaps a third bout with Mike Alvarado would be best from a selling point, I certainly wouldn’t mind seeing them go at it again. As for Diego Chaves, I think after getting his name out there in his loss to Thurman, didn’t do himself any favors in this one and might have ruined his chances of a return State-side against any other big name fighters.