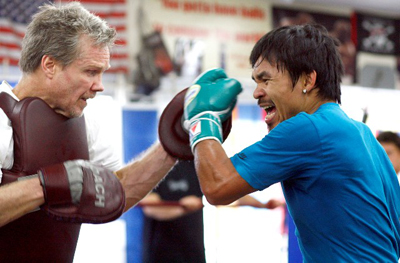 April 12th, on HBO PPV Manny Pacquiao puts it all on the line against Timothy Bradley in a rematch tainted by the controversy of their first bout. Bradley’s scorecard gift-decision last time around earned him more critics than fans to say the least. This time around he is not only under tremendous pressure to win, but to win decisively. As such, he could not have picked a tougher match-up in Pacquiao.

ThaBoxingvoice.com caught up with Freddie Roach, Pacquiao’s trainer, who insists that Pacquiao came back from his KO loss to Juan Manuel Marquez “Fresh and hungry”, adding  “He won every round against Rios and you’re going to see the same thing with Bradley”.  Bradley, however, isn’t Bam Bam. Since Bradley last met Pacquiao, he’s defeated Marquez as well as Roach’s own Ruslan Provodnikov; meanwhile Pacquiao is on the come back trail after suffering his first KO loss since 1999.

Roach suggests that Pacquiao, now invigorated by his losses is as dangerous and aggressive as ever.  He says that they were being cautious during the Rios fight, “ We don’t want to take a chance and walk into a shot like we did in the Marquez fight.”  Roach dismisses the notion that Pacquiao is in anyway a diminished fighter, “By [Bradley] saying that he has no killer instinct, [Bradley] really woke him up, and we thank him for that.”

Roach goes on to say that Pacquiao has been hardened as a result of his ringside-robbery by the judges in their last fight. “He won the first fight handily, the thing is he just was too compassionate. He knows he can’t be compassionate anymore because otherwise you don’t make money and you don’t sell tickets.”  Roach insists that this fight, despite all it’s difficulties will again bring out the monster in Pacquiao.