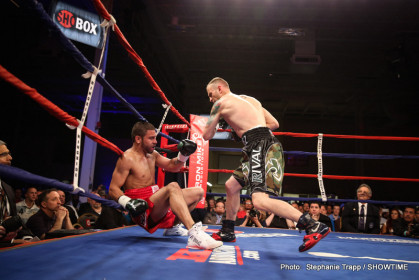 There is no doubt that up until now 140lb champion Danny Garcia has been taking on good opposition and had been facing the best in his division. He holds wins over Erik Morales (twice), Amir Khan, Zab Judah, and Lucas Matthysse. However, no fight fan including myself is happy or excited about his upcoming fight against Rod Salka. Despite his lackluster performance in his last fight against Mauricio Herrera, Garcia is still regarded as a world class fighter and is still a World Champion and is expected by fight fans to take on good opposition like any other champion is. At the same time, Showtime subscribers also expect to be provided with competitive fights and not mismatches. A match up like this can only do bad things for our sport as Rod Salka hasn’t earned the right to be in the ring with the lineal Jr. Welterweight champion.

However, the blame shouldn’t be put on Rod Salka but rather on Showtime sports executive Stephen Espinoza and Golden Boy Promotions president Oscar De La Hoya.

“I get all the backlash, (from the fans and media) I understand, I get it,” stated Salka. Even Salka understands the rage from fight fans around the world which truly shows how pathetic this matchup is. However, to Rod Salka’s credit, he is determined to win this fight and is planning on taking full advantage of the opportunity. Salka said “It’s actually easier because now all I have to focus on is boxing.” He also added by saying. “This fight here has given me the opportunity to go away to camp and focus 100%.”

Style wise, Salka would be considered a boxer by most observers. He has good feet and moves well and provides a moving target for his opponents. He has good defense when boxing on the outside and works of the jab, though he isn’t too accurate with it. Salka seems to sometimes punch with his fists open which probably explains his lack of power. He also isn’t the most accurate or crisp puncher.

Salka stands at 5’7 with a 62 ½ inch reach making him a relatively small Jr. welterweight compared to Danny Garcia who stands at 5’9 with a 68 ½ inch reach. However, Salka made it clear in his interview with (Tha Boxing Voice) that the weight won’t be a difference maker in this fight. He stated “I can probably make 130; I can make 135 you Know what I mean? But to do that man I cant to a push up or a pull up and I really got to watch the diet.”

He also went on to say, “At 140lbs I’m able to do some of my functional exercises and do some different routines and do some strength and conditioning stuff and I’m able to keep that muscle on rather than to burn it off to get to the lighter weights so I’m happy.”

Personally, I am happy for a blue collar guy like Salka getting a chance like this but at the end of the day this fight is unacceptable and boxing fans expect more for being a Showtime subscriber.