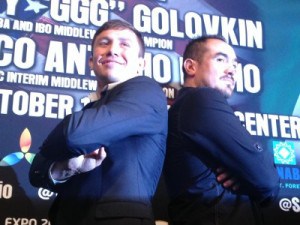 Gennady Golovkin and Marco Antonio Rubio underwent the live weigh in process today in Carson, California. Golovkin weighed in at 159lbs and Rubio weighed in 1.8lbs over the weight limit of 160.

According to an article written by Jake Donovan on Boxingscene.com, “He [Rubio] has two hours to get within the divisional limit, otherwise will be subject to a fine along with additional forfeiture of his purse to allow the fight to go through.”

In reality the only aspect of this fight in jeopardy is Rubio’s purse if he is unable to drain the additional weight. The fight with Golovkin is more than a payday for Rubio. It is a chance to become the kingpin of the division. Despite Golovkin being an overwhelming favorite, Rubio is not fazed. Rubio’s camp has been adamant that they are looking forward to pull off the major upset.

Rubio will be one of the harder punchers Golovkin has faced in recent times.  Their “Mexican Style” of fighting will surely guarantee an action filled bout. Many fans have traveled across the U.S. to see Golovkin this Saturday night. This bout promises to deliver an electric atmosphere in the Stub Hub Center.