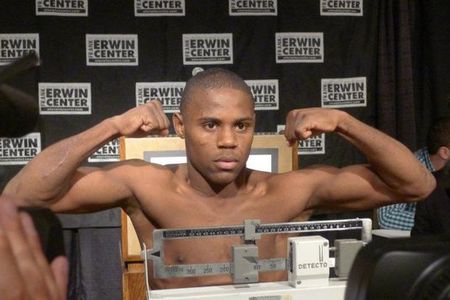 Javier “El Abejon” Fortuna (20-0, 15 KO’s), the Dominican born knockout sensation has blasted on television networks with his high light reel performances. The higly touted contender is now living and training out of trainer Pablo Sarmiento gym in Oxnard Ca, His southpaw left has been responsible for the type of knockouts that gets awarded knockout of the year.

Fortuna is coming off his July 6 obliteration of former IBF Featherweight Champion Cristobal “Lacandón” Cruz (39-14, 23 Kos). Fortuna will be back in action in December, said his promoter Sampson Lewkowicz of Samson Boxing. He also said it would be “Definitely a top ten Jr. Lightweight.”

So we have to assume Fortuna has graduated from ESPN and the big networks want to showcase “El Abejon.” So the December 1st undercard was announced, and that card has no top ten Jr. Lightweights on it for Fortuna to destroy.

Pacquiao (54-4-2, 38 KOs), of the Philippines, and Márquez (54-6-1 (39 KOs), of México, who have won world titles in 12 weight divisions between them and they will go mano a mano and toe-to-toe for a 4th time in a 12-round welterweight battle, Saturday, December 8, at the MGM Grand Garden Arena in Las Vegas, Nevada. This is a Top Rank card and the Bob father has a top ten Jr. Lightweight in Diego Magdaleno 23-0-0 (9 KOs). This would be a tremendous fight and one that I would favor the speed and power of Fortuna.

December 15, a rumored return date for Mexican icon Saul “Canelo” Alvarez against an unnamed opponent. Also rumored to be fighting the same day is Amir “King” Khan 26-3-0 (18 KOs) taking on lightweight Carlos Molina, 17-0-1 (7 KO’s). With both Alvarez and Khan being with Golden Boy, if Fortuna is on that card, the only Jr. Lightweight Golden Boy has is Ronny Rios.

Other top 10 guys that come to mind are Juan Carlos Burgos and Juan Carlos Salgado. Either way, Fortuna is becoming must see television and the viewers and fans alike would welcome Fortuna taking on any of these foes.