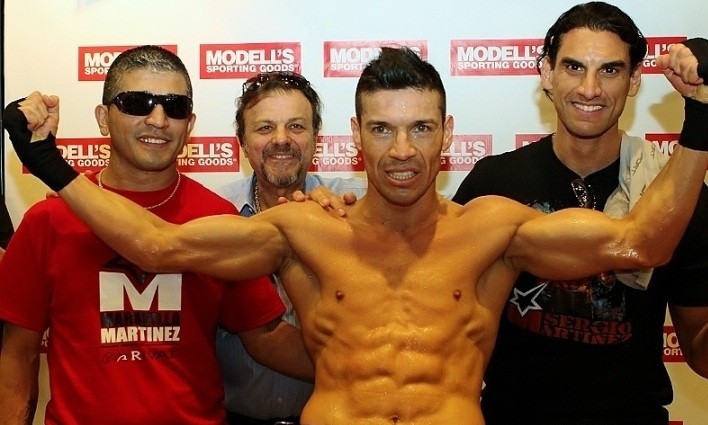 The boxing world has been buzzing with the big showdown that will take place between Sergio Martinez and Julio Cesar Chavez, Jr. in the middleweight division, on September 15, 2012. ThaBoxingVoice.com reached out to the main man in the corner of Sergio Martinez, his head trainer Pablo Sarmiento. Famous for his moniker of the sunglasses indoors style, Sarmiento was as surprised as many that this fight is actually taking place. “We waited for this fight for such a long time, yeah we’re surprised, but we’re going to demonstrate what we can do to Chavez, and the former world champion will be champion again,” Sarmiento told ThaBoxingVoice.com last night.

Nicknamed “El Hueso” (bone in Spanish), because a reporter thought he was real skinny for a top boxer in his category, Sarmiento boxed and won boxing titles. His ultimate goal was to come to the United States and train alongside with his brother Gabriel Sarmiento. His brother Gabriel was once the head trainer of Sergio Martinez but ran into some trouble in Spain. When asked of his brother Gabriel, Pablo told us, “Gabby is good and is in Spain and the problems are resolved but he’s going to stay there for now and train boxers over there. He’s the man that stared the sunglasses indoors style, it hasn’t gone away and when he comes back we’re going to trademark it (laughed).”

Sarmiento boxed professionally until 2010 but has been training boxers since 2005 as he was training as a fighter. Those pupils range from Martinez, young prospect Javier Fortuna of the Dominican Republic, and light heavyweight Gabriel Campillo of Spain. Campillo was a victim of bad scoring in his last bout with Tavoris Cloud but Sarmiento states, “Campillo was very hurt when that occurred but is in good spirits and should be returning in September of this year, and he’ll be back on track for a world title.”

Since Sarmiento knows how sketchy the judges treated him in Texas in February, coupled with the recent controversial decision that occurred in Las Vegas between Manny Pacquiao and Tim Bradley; the general consensus might be that the Martinez camp might worried about getting a fair shake in Las Vegas against a Mexican on Mexican Independence Day. However, Sarmiento isn’t. “We’re not worried about the judges because it’s not going 12 rounds.  For sure we’re going to stop Chavez because Martinez has superior hand speed, better boxing ability, and power in both hands,” Sarmiento explained.

Most observers ringside were impressed with the performance of Chavez against Andy Lee, and some now are even picking Chavez Jr. to score the upset against the recognized middleweight champion of the world Martinez. Sarmiento however disagrees, “The ring was small yes, but Andy Lee didn’t throw enough punches, traded a lot, and just stood right in front Chavez.” If he could compare this fight to another Martinez has had in the past, he points directly at the Kelly Pavlik fight. “This fight is similar to the Pavlik fight with the size but Pavlik was the tougher fight and look what happened. He was a better boxer when we fought him than what Chavez is now. Look what happened and how we beat him.”

Sarmiento sees this fight as another stepping stone to add to Martinez’ career and feels that no one in the middleweight divisions is equal in the ring to Sergio Martinez. “No middleweights pose a threat, the only fighter that poses a threat to Sergio is Floyd Mayweather. But if there’s a boxer that can beat Floyd, that boxer is Sergio Martinez,” said Sarmiento. That’s a fight most pound for pound pundits would die to see.

For full audio of this interview click here: http://www.blogtalkradio.com/thaboxingvoiceradioshow/2012/06/21/martinez-vs-chavez-jr-pablo-sarmiento-lou-dibella-tell-all