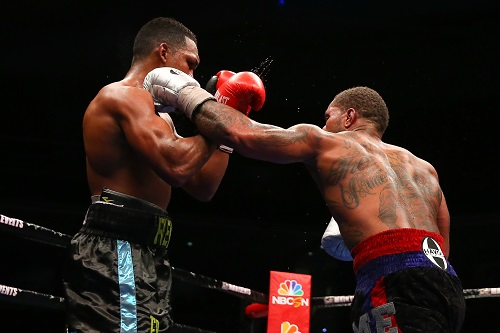 PHILADELPHIA (April 4, 2014) – Tonight at the Liacouras Center in Philadelphia, PA, Gary Shaw Productions middleweight contender Tureano Johnson (14-1, 10 KOs), was robbed of his opportunity to continue fighting with Curtis Stevens (27-4, 20 KOs) when referee Gary Rosato prematurely stopped the bout at the 2:09 mark of the tenth and final round.

Johnson, who controlled the action early on, got off to a great start and mounted a considerable lead against Stevens’s midway through the bout.  As the fight entered the final rounds, Johnson continued to stand his ground and win rounds as both fighters were going toe to toe.  Entering the tenth and final round, Stevens, who was clearly down on the scorecards, landed a nice left hook that slowed Johnson down, and the referee halted the bout prematurely.  Tureano Johnson was clearly ahead on the scorecards and had plenty of life left to finish the bout before the referee stopped the action.  When the bout was stopped, boos from the crowed were heard throughout the arena, validating a premature stoppage.

“I’m outraged that my fighter Tureano Johnson was robbed of his ability to finish the fight.” said Gary Shaw. “Johnson clearly could have continued on.  Stevens is nothing.  Johnson was winning every round.  I’m going to protest this premature stoppage and demand an immediate rematch.  To rob a fighter like Johnson got robbed tonight is preposterous.  With what Johnson gave the fans tonight, he should have at least been able to finish the fight.  I’m beside myself with this decision.”

“I wanted to come out tonight and give the fans an all action war.” said Tureano Johnson. “My game plan was to come right at Stevens and bring the fight to him.  I did exactly what I wanted to do and I was winning the fight convincingly.  I have a great chin.  When he landed that left hook in the final round, I was rocked, but I was ready to continue.  I was robbed by the referee tonight and the fans should rally behind me to command an instant rematch.  My message to Curtis Stevens is…you better not run from the rematch, because if you do, the fans will know you’re a fraud.”