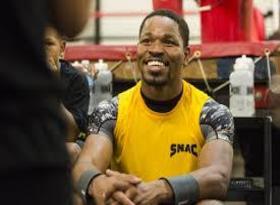 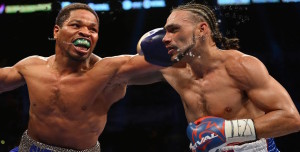 One of the biggest fights in the welterweight division that could be made between Shawn “Showtime” Porter (26-1-1, 16 KO’s) and Keith “One Time” Thurman (26-0, 22 KO’s) still has yet to be finalized. Talks have been going on between the two camps and Porter recently took to social media to give fans an update on the possible showdown that boxing fans want to see and has stated that he and his team really want the fight to happen.

“I know there’s been a lot of talk about a fight between me and Keith ‘One Time’ Thurman this week so I just wanted to say that even though 2015 is ending soon, DON’T FORGET ABOUT THIS FIGHT! ‎Team Porter‬ wants it more than anything and both sides are working to make it happen for the fans,” stated Porter. “Personally, I won’t stop pushing for this fight until I get it. Everything happens for a reason! Never forget that.”
In 2013 Porter defeated Devon Alexander to win the IBF welterweight title and then went on to annihilate Paulie Malignaggi before losing to Kell Brook. Since the loss, Porter has come back going 2-0 with his most impressive victory coming against Adrien Broner despite the fact that he was dropped in the twelfth round.
Thurman has done very well for himself with his biggest win against Robert Guerrero earlier this year but showed that he is not at all invincible when he faced veteran Luis Collazo and was badly hurt from a shot to the body.
Should Porter and Thurman indeed meet this year the winner would get that much-needed boost to that next level that they have been searching for.   A fight with Floyd Mayweather (which both fighters have wanted for a long time but were unable to get) is out of the question with Mayweather retiring, but there are other big fish in the division at that next level that would be on the menu for the victor.
Tweet