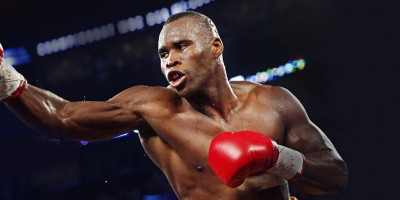 Oh what difference a year can make as Adonis Stevenson now setting his sights on the legend of longevity with dollar signs and legacy in mind. Much to the chagrin of hardcore fans after the ground work had already been laid out building anticipation for a fight with powerful puncher Sergei Kovalev.

One can hardly blame boxing fans who routinely get hosed year in and year out for getting angry at the outcome, but to blame just Stevenson or Al Haymon would not be fair either.

The blame can also be spread to HBO in a variety of ways for not closing the deal with Stevenson’s signature before the late November card, not kicking in another 100k for this fight, and for booting Golden Boy off their network in the first place. Don’t get me wrong both Golden Boy and HBO shoulder the blame for their split but the end result has only added fuel to the raging fire.

Adonis Stevenson set the boxing world on fire not once but twice in the last year. Last June Stevenson exploded on the world scene with a one punch knockout over than lineal 175 Champion Chad Dawson in the opening round.

After stretching his KO streak to 10 collecting two more victories to close out 2013, everyone assumed that Adonis would face Sergei Kovalev, just the way HBO planned it making Bernard Hopkins yet another casualty of the cold war.

Last summer I wrote an article about the light heavyweight division and HBO’s unofficial tourney of sorts with the amount of talent that was available to the network.

Midway through last summer the list included the newly crowned king Adonis Stevenson, Sergei Kovalev, Jean Pascal, and Andre Ward or Carl Froch potentially moving up to round out a healthy group of fighters that could be matched up for two years worth of compelling fights.

The most important fact was that none of the aforementioned names had ties to Showtime or Golden Boy, allowing the 175 pound division moments of clarity in a current cold war climate. The cold war was great for business in 2013 with each side forced to match their fighters in tough fights raising the level of creating real competition.

In 2014 however, the battle lines have deepened causing other promoters on HBO to now be afraid to do business with Showtime. Every business quarter the list gets shorter for compelling fights without Top Rank and Golden Boy coming to some sort of truce.

If you read into Stevenson’s quotes after his shocking knockout it was clear that he had Bernard Hopkins or at least more money on his mind long before Al Haymon stuck his nose in to the situation. It’s crazy to think how quickly HBO’s unofficial 175 tourney dissolved in to thin air right before our eyes leaving Sergei ‘The Krusher’ Kovalev in the same position Bernard Hopkins was in just a year ago.

Most hardcore fans see this weekend’s fight with Andrzej Fonfara as a overprice tune up for Adonis taking up a prime time slot with yet another network showcase. Showcase fight or not, Fonfara will show up to win this fight. The style matchup and Andrzej’s aggressiveness should give us some excitement while it last.

It’s doubtful that Fonfara will last the full 12 rounds but the veteran with only 2 losses in 28 fights will make his presence known to the viewing audience and to Stevenson, who could come in looking for another highlight reel KO.

Fonfara has improved as of late with 16 wins in a row after being stopped by Derrick Findley in 2008. He has a solid jab, is a decent puncher, and isn’t afraid to mix it up.

He will have a reach advantage over Stevenson, who stands 5’11 with a 72 inch reach compared to Fonfara at 6’2 with a 77 inch reach. The reach really won’t matter unless he and his team are planning to box on the outside waiting for Adonis to make a mistake.

His best strategy may have nothing to do with reach instead crowding ‘Superman’ forcing the action to take place in a phone booth. Smothering Stevenson’s power left hand could prove to be a worthy game plan, but it’s yet to be seen if he can actually cut ring off on a quicker handed and more athletic fighter. Fonfara needs to mix patience with activity behind a solid jab, body punching and pray to high heavens his chin can hold up if he has any chance to take this fight into deep waters.

Both networks have been accused of having too many showcase type fights on the schedule in 2014. Will this be a one sided slaughter? More than likely but plenty of these so called mismatches have produced entertaining fights.

Mayweather vs. Maidana, Pacquiao vs. Bradley 2 when first signed, Garcia vs. Herrera, last year’s FOTY Bradley vs. Provodnikov, and Matthysee vs. Molina all turned out to be great matchmaking instead of the mismatches that the media and fans labeled them beforehand.

Let’s hope Fonfara makes this a competitive battle with at least a bit of intrigue in the mid to late rounds. Look for this fight to start slow in the first 2 or 3 rounds until the fighters have figured out their range and begin to exchange.

The co-feature for this Showtime tripleheader some would say is a meaningless fight for the weight class and I agree with that sentiment. However, I could care less that neither fighter will make any real noise at middleweight because there will be bloodshed between David Lemieux and Fernando Guerrero. Both fighters formerly known as must see prospects will give the paying audience its money worth.
My official prediction is Adonis Stevenson by 8 round TKO or KO and David Lemieux by Late TKO.
Don’t forget to catch the conclusion of the Boxcino Tourney on Espn2 FNF. Sure it didn’t have any top names but it may produce a contender at 135 or 160 and defiantly featured some upsets and competitive fights all in a short period of time. I hope Espn2 does it again at a different weight class in 2015.