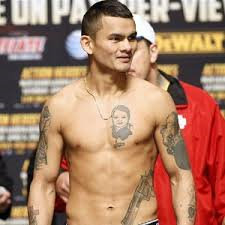 While the world awaits the announcement of Floyd Mayweather’s next opponent rumors have been circling about a finalized fight between Mayweather and 147 pound champion Marcos Maidana. Maidana’s team have released a statement  denying those rumors and stating that the fight is far from being made an other fighters are still in the mix.

“Considering that rumors have been circulating in the last few hours adressing a “done deal” fight between WBA Welterweight champion Marcos Maidana and WBC champ Floyd Mayweather Jr. we want to clarify that those versions are not accurate.

Maidana is well aware that he is indeed a firm candidate to face Mayweather Jr. next May 3rd but the fight is far from being made or confirmed as other fighters are still also in the mix. Hopefully we will have news in the next few days but in the meantime we don’t want to confuse the fans or the boxing press. Maidana of course wants to unify titles with Mayweather but for now we will have to wait. Many thanks.”