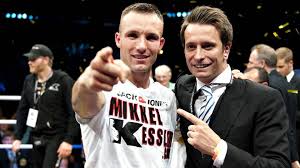 Team Sauerland is proud to announce SAT.1 as its new German television partner. SAT.1 will broadcast all Team Sauerland events, beginning in 2015. The deal between both parties was signed today in Berlin, prior to a press conference at the city’s famous Hotel Adlon, attended by the stable’s star boxers and media representatives from around the world.

Kalle Sauerland: “We are very happy to have found a new and accomplished television partner for the German market. There are exciting times ahead!”

The deal between Team Sauerland and SAT.1 will not only include the presentation of world champions such as Arthur Abraham, Juergen Braehmer, Marco Huck and Yoan Pablo Hernandez but also up and coming talents, including Jack Culcay, Stefan Haertel, Noel Gevor, Vincent Feigenbutz, Enrico Koelling and Tyron Zeuge. Said Kalle Sauerland: “This was one of the major factors in our negotiations with SAT.1. We not only want to show the best but also our young fighters on their way to the top. That is and will always be our concept.”

Frederick Ness (CEO Sauerland Event): ‘’SAT.1 will provide a perfect platform for our young, talented stable of boxers. They are the stars of tomorrow and with the help of SAT.1, German boxing fans will be able to follow their journey as they endeavour to become the next generation of world champions.’’

The new partnership with SAT.1 represents a break for Team Sauerland with current broadcaster ARD. Said Kalle Sauerland: “We want to thank everybody at ARD for a long and successful collaboration. This was not an easy step as ARD want to continue to broadcast boxing. But the show must go on and we are excited to ring in a new era with ProSiebenSat.1. Boxing in Germany will be bigger than ever!”