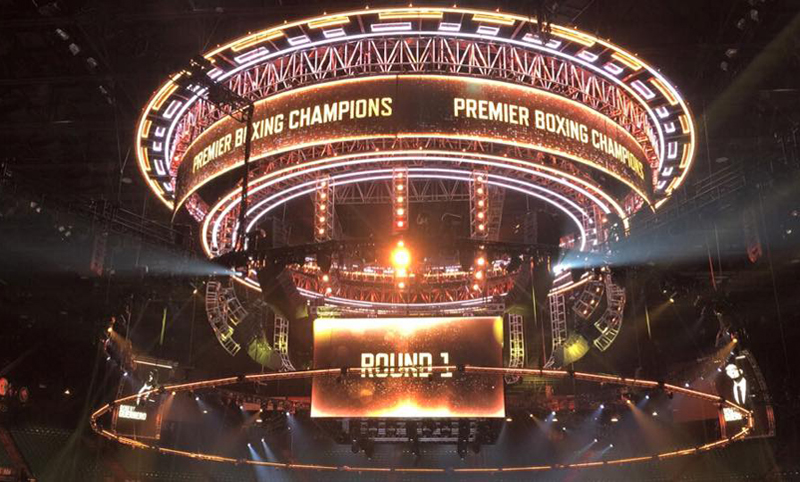 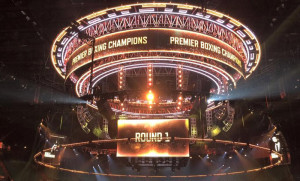 PBC a Success?
Earlier in the week Al Haymon’s PBC Series signed yet another multi-year deal with Bounce TV (never heard of this channel) and then PBC held its first event on Saturday night on NBC. I must say that it was a little underwhelming for me personally. I was super hype for the debut, and I was telling anybody and everybody I could that it was going to be a great show.

Unfortunately, I was looking like a damn fool during the Broner versus Molina fight because Molina didn’t show up in addition to Broner deciding to play it safe and just go for a point’s victory. Those combined factors made me “AB” (Absolutely Bored) during the Broner fight and so was my wife who was watching with me.

Broner really should not have been in the debut and especially not against a guy in Molina who decided it was time for him to become Apollo Creed on the big stage instead of the Rocky Balboa that got him to the dance.

To make matters worse, the commentary was horrible at best. I never really cared for Sugar Ray Leonard as commentator, and he did nothing to sway my opinion in his favor. Marv Albert seemed to be calling a Knicks game, and Laila Ali was just “there” it seemed. With all of them combined, they gave a feeling as if no one knew what was going on at times during the fights and it translated poorly on the primetime stage.

The Guerrero – Thurman fight made up for the somber feeling I had a little bit but not much. Overall I will say it was successful but not as much as I thought it would be. If I had to grade it out, I would give it a C+ or B- at most, and I am hoping the next NBC installment turns out a better product in and out of the ring.

Sorry but Thurman is not Ready for Floyd or Manny

I was very high on Thurman until his last fight against Bundu when he decided he needed to run away from a guy that had little power and was clearly not on his level. This battle with Robert Guerrero did nothing to raise my level of interest in Thurman either.

Yes, Thurman easily won the fight, and he even scored a knockdown in the 10th but he did not show me anything that makes me think he can beat Manny Pacquiao and definitely not Floyd Mayweather Jr. My main issue with Keith is that he is committing false advertising by saying he goes for knockouts but then he gets in the ring and runs around the ring once his foe does not succumb to his power in the first few rounds.

I don’t mind guys that can box and show skill (I’ll watch Floyd any day) at all but don’t try to sell the public that you are some fierce power punching killer and then start running from the slower than molasses Robert Guerrero. If Thurman wants to see a real killer all, he needs to do is look at GGG to see how a fighter with great power is constantly looking for the KO until the fight is over.

And for those that think he can easily KO Floyd or Manny just think about one thing. Thurman has NEVER faced a fast fighter that can box or a fast fighter period. If Guerrero can easily hit him what do you think Floyd & Manny will do to him? 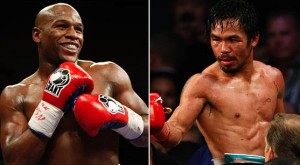 Floyd’s former friend 50-Cent is betting $1.6M on Mayweather to beat Pacquiao on May 2nd thusly showing that he at least has enough common sense not to let his old friendship get in the way of making a smart bet.

Zab Judah will be sparring with his friend and former foe, Floyd Mayweather, to help him better prepare for his super fight with Pacquiao. Zab is, of course, a southpaw, and he gave Floyd a little trouble for the first few rounds when they fought. No one certainly can mimic Manny, but Zab is a good sparring partner to help out.

Speaking of sparring partners, or lack because of that. Freddie Roach is claiming that Al Haymon has paid several sparring partners not to help out Manny Pacquiao with his training. If this is true, I say it is a smart business move by Haymon, and it helps Floyd inflict the usual mind games he likes to employ for his fights.

While Roach and Pacman’s strength and conditioning coach, Justin Fortune, may be upset I say it is not that big of a deal really. Arum says that Floyd is becoming a lot more vulnerable so it shouldn’t matter right? If they actually think that anyone can mimic Floyd other than Floyd, then they may really be in trouble come May 2nd. There is only one Floyd Mayweather just like there is only one Manny Pacquiao.
UK trainer Adam Booth says that he can “see Mayweather comfortably out boxing” Manny. This seems to be the consensus going around right now although the betting lines are coming down a bit. Regardless we can add Booth to the list of trainers who think Floyd is bound to outbox Manny when the two get into the ring. 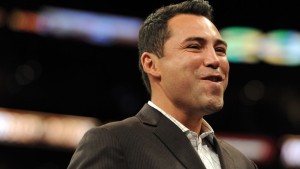 Oscar will never give Floyd Mayweather Jr. credit regardless of what he does, and he will forever find a way to hate on Mayweather. This may be due to the fact that Mayweather easily beat him and continues to out due him at every turn. Nonetheless, it would just be nice to hear Oscar stick with one stance and stop being so fake.

This week he claims the fight will be boring and is trying to take credit for the fight happening at all, among other things. If Oscar would have assumed responsibility for his “Personal Demons” then maybe he would be in a lot better situation than he is today, with significantly fewer fighters to promote and he could stop hating on Floyd out of jealousy and envy. 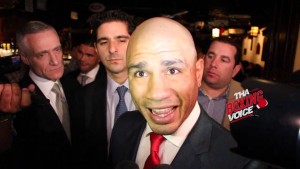 Early in the week, as first reported by Tha Boxing Voice, Miguel Cotto announced that he signed a deal with Roc Nation much to the chagrin of Top Rank Promotions. Top Rank was very upset and claimed that Cotto betrayed them while going back on a promise he swore on his dead father.

Then later on in the week details of the deal came out stating that Cotto will make $55M for three fights, and his first one will most likely be Cornelius “K9” Bundrage. No disrespect to Cotto or his father but for $55M I am sure his dad wouldn’t have been too upset with him going back on his word even if he did.

As far as Top Rank goes, unless they were offering the same kind of deal, they should have nothing but respect for him being able to secure such a significant monetary contract. Boxing is a business, after all, right?

Paul Butler gets KOed by Tete

In what might be the knockout of the year so far in a fight that went past 1 round, Zolani Tete defended his IBF super flyweight title by knocking out Paul Butler with an awesome uppercut in the eighth round. Butler tried valiantly to get inside on the champion all night, but the height and reach advantage were just too much.

Butler demonstrated a tremendous heart by never giving up and continuing to try while fighting an uphill battle. Tete showed that he would be trouble for any super flyweight in the world, and Butler showed that while he lost his first fight, he will still be in demand from the fans after such a courageous effort. 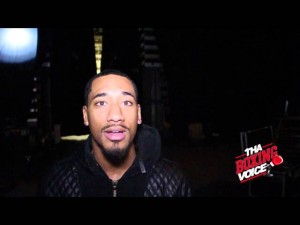 I must admit that I have not been a big fan of Demetrius Andrade in the past because I feel he runs his mouth way too much for a guy that has not had a big fight yet. Recently however I have grown to like him more after I watched a video that was put out by Nestor Gibbs of Tha Boxing Voice.

Andrade showed in the video that he is willing to fight anyone, and now his Dad is even writing open letters and calling out Erislandy Lara too after the Charlo brothers seem to have gotten cold feet. Lara now appears to want nothing to do with Andrade either. He is coming out with a slew of excuses that Demetrius is easily shooting down.

Now that Lara is receiving a dose of his own medicine it seems as though he does not like it too much. In the meantime, we are reaping the benefits as boxing fans by getting to listen to the trash talk. Hopefully Lara steps up and takes the unification fight like Canelo did after Lara continually called him out and delivered a healthy dose of trash talk.

Saturday night in Macau, China, Zou Shiming was easily outboxed by Amnat Ruenrong in a 12 round unanimous decision win for the visitor. The fight not only highlighted that Zou was not ready for the title fight but also that he is not on the level of his fellow Olympians, Guillermo Rigondeaux & Vasyl Lomachenko, who fast-tracked themselves to world titles.

Abner Mares fought on the PBC debut too but most people tuned off by then, and parts of the live audience walked out as he struggled against a relatively unknown opponent in Arturo Santos Reyes. It is a sad fall from the P4P fighter he was before he got KOed by Jhonny Gonzalez. While I think a fight with he and Leo Santa Cruz might still be decent, I sadly don’t think he does any better against the champions in the division.
Roy Jones Jr. won his Cruiserweight debut against Willie Williams this weekend and now wants to fight the actual champ in Marco Huck. I sure hope this does not happen. RJJ just beat a guy with 9 losses and now wants to fight a guy who is has a record-tying 13 title defenses in a row. Huck has only lost a contested fight at heavyweight to Alexander Povetkin, in the last five years? No thank you. Huck easily beats Jones and continues to strip away Jones’s once “invincible” aura that has been destroyed by multiple KO losses.

Joey Dawejko scored a 27 second KO of Enobong Umohette on ESPN Friday Night Fights and then called out Amir Mansour. These two may not be the cream of the crop in the heavyweight division but they sure as hell would make a good fight. Hopefully, this fight can get made and can be made into a high visibility fight for casuals because someone is getting knocked out if it happens!

Daniel Jacobs says, “we’ve seen the flaws” in Gennady Golovkin. So I say why don’t you fight him then? Could it be that Jacobs’s biggest flaw (getting destroyed by KO to Dmitry Pirog inside of 5 rounds) would be GGG’s biggest strength? Yup! Everybody’s got a plan till they get hit in the mouth huh.

That’s all we got for this week but that is by far not all there was to talk about. Make sure that you catch Tha Boxing Voice weekly radio show live every Thursday and Sunday starting at 7pm (EST) or find the podcast to get more insight and opinions on the world of boxing.