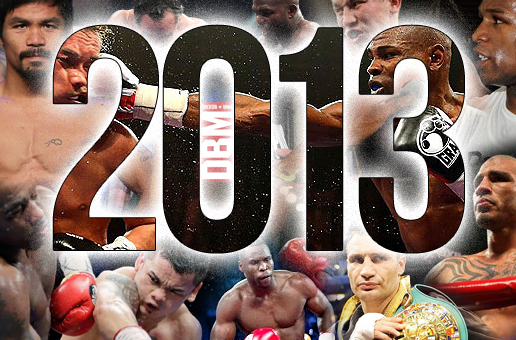 Here are the best of the rest in ThaBoxingVoice.com’s 2013 boxing awards.

Round of the Year (Tiebreaker):

Winner-Bradley-Provodnikov Round 12: Bradley was done. He was out on his feet but still fought back. Had he not taking a knee, it could have been a stoppage victory for Provodnikov.

2) Bradley-Provodnikov Round 6: The Fight of The Year had two round of the year candidates with this round having nothing but action. Provodnikov stalked Bradley and had him hurt on the ropes. Bradley fighting with wobbly legs, fired back in a fierce exchanged that lasted past the bell.

3) Broner-Maidana Round 2: Broner hurt and down for the 1st time in his career as his body dropped and nearly went through the ropes. It was also the cause of many boxing memes because of it.

4) Kirkland-Tapia Round 3: Probably the best round of the fight where both man exchanged vicious shots. The tide seemed to be turning Kirkland’s way to begin the round but the young Jersey fighter got off the ropes and stunned Kirkland in what would be Tapia’s last good moment of the fight.

5) Bey-Molina Round 10: It was the salute of Bey to The Money Team and Molina coming back in the final round to earn the stoppage that made this round classic especially because Bey had the win in the bag.

Robbery of the Year:-Beltran SD Burns: Ray Beltran has had his share of bad decisions not go his way throughout his career. The decision against Ricky Burns had to hurt the most. Beltran traveled to Scotland to take on the home fighter and displayed that he was no longer a sparring partner as the British commentary suggested on Sky Sports. He basically beat down Ricky Burns, breaking his jaw in the second, and dropping him in the 8th. In a fight that was easy to score, most media members had the fight 116-111 in favor of Beltran. The judges in Glasgow had a much different score. Carlos Ortiz Jr. had it 115-112 for Burns while Richard Davies had it a draw. Andre Van Grootenbruel had it 115-113 for Beltran, leaving Beltran dejected and empty handed in Scotland.

You can only feel bad for Beltran as he should be a world champion. Instead of him getting an immediate rematch, Burns instead will take on Terrence Crawford on March 1st leaving Beltran shutout. The cliché of that being boxing isn’t right for fighters like Rey Beltran, especially when his livelihood is left in the hands of others who can’t score a fight properly.

Runner Up-Chavez Jr. UD Vera: The fight at first was a good comeback fight for Chavez that would provide action but one Chavez was supposed to win. However, with Chavez, it’s always a circus. First, the fight was pushed back because of an injury but most suspected it was because of Chavez was out of shape. Then the fight was moved from 160 lbs to 168 then to 173. Vera, the consummate professional took the fight and made a few extra dollars for his inconvenience.

The fight provided action with Chavez being inactive in spots allowing Vera to look better in most rounds. When Chavez was active, he landed big shots especially because he was the bigger man. In the end the nod could have gone to Vera, but it was definitely a close fight. The scores however suggested Chavez dominated, 98-92, 96,94, and 97-93 all for Chavez. Vera will at least get his rematch in March of this year.

Comeback Fighter of the Year-Marcos Maidana:  After a loss to Devon Alexander in 2012, Marcos Maidana was seen as one dimensional and maybe too small for the welterweight division. Then, he linked up with Robert Garcia and things changed. We had seen sprinkles of Garcia’s tutelage in his 2012 campaign when he beat the gritty Jesus Soto-Karass in a fight of the year contender.

In 2013, Maidana stopped a game Josesito Lopez in a fight of the year contender once again showing that we he needs to, he can go balls to the wall and win a fight.

He outdid that performance with an upset over Adrien Broner winning his 1st world title. He showed aggression, focus, and a will to win that was not going to be broken by anything Broner did. Maidana dropped Broner twice en route to a decision victory.

Runner up-James Kirkland: When he’s with Ann Wolfe, he a meaner and better fighter. He showed that with his stoppage of prospect Glen Tapia, taking Tapia’s best shots and returning the harder blows. Kirkland’s vicious victory makes him a player at 154 and must see TV.

Event of the Year-“The One” Mayweather-Canelo: It was the biggest fight of the year that included the fight the hardcore boxing fan wanted to see, Garcia-Matthysse. It broke all types of records in money made and was the second highest viewed pay-per-views in terms of buys with 2.2 million buys. The eyes of the world were on boxing that weekend and no other event even came close to it.

Moment of the Year-Mares getting dropped by Gonzalez’ left hook: Probably not a popular pick but it was our upset of the year shocking pretty much everyone including Canelo Alvarez on an episode of All Access.

Others Receiving Votes: Mayweather’s move to Showtime, Groves Dropping Froch, and Barker getting up from a body shot knock down in his fight with Geale.