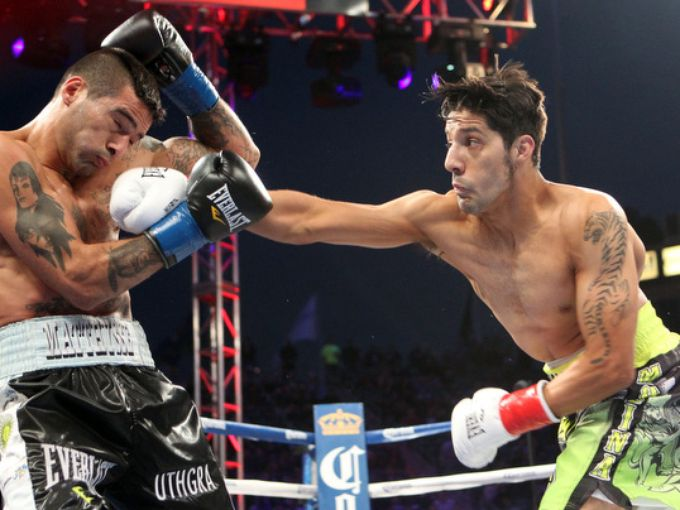 John Molina has never been the slickest fighter. He has never been the fighter who was heavily promoted, often coming in on the b-side of a headliner, and often spoiling a showcase fight for his opposition. Molina who stands just a hair below 6 feet, spent most of his career fighting at lightweight, showing cheekbones at weigh ins and astounding onlookers that he could even make the weight. Whether it was a heroic come from behind win against Hank Lundy in 2010 or knocking out Mickey Bey in last minute of a fight he had lost every second of, Molina has been the guy who would never go away in the division, yet  he has never  been truly respected the way he ought to be.

Sitting among my media colleagues some scoffed at Molina’s chances citing one fight against Antonio DeMarco in 2012 in which Molina was stopped in less than a minute. In this fight he was up against Lucas Matthysse, who was viewed last year as the best junior welterweight in boxing, before showing flaws against Danny Garcia last summer. Matthysse, a mythic figure in boxing circles, arrived on the radar a while ago. He became the talk of the town after knocking out Lamont Peterson earlier last year at a catch weight bout of 141, that saw Peterson keeping his IBF junior welterweight title even after the loss.

To the novice it was so simple on paper, Matthysse had the boxing ability to move away from Molina, who has plenty of power, but shows frustration when fighters will not come forward and engage him. Molina did not get this memo and from the onset, a pro-Matthysse crowd was sent into shock, as an overhand right from Molina took both fighters chest to chest and sent Matthysse to the floor. Molina jumped to the ceiling as if to say “…it is happening.” Molina’s been in wars all of his life and he gave Matthysse, a man viewed as one of the toughest, a true test.

What ensued was a blur. I lost track of rounds, punches and even what was truly happening as both fighters were opened up, with blood flying in the ring like an old pro wrestling match. First, Matthysse was cut from a clash of heads. Later, Molina would show cuts on the back of his head. Molina, who had started off so strong flooring Molina with a punch that looked to be an equilibrium shot that made Matthysse feel the effects of Matthysse’s straight right that he peppered him with throughout the first frame. Much like the Peterson fight, Matthysse was using the right to body to move Molina into a left hook, the punch that put Peterson away.

Molina spent the later part of the fight on the ropes throwing bombs in select fashion, mainly getting tied off, and eventually being sent to the floor. Molina showed the thing that made him beloved to this day and the thing that will make him a legend to many of the work class of fighters. Molina had many chances to leave the fight, to give in, but he refused to give up, even after being knocked down in the tenth and barely beating the count, on wobbly legs, Molina refused to quit. The doctor came to the corner and a stoic Molina refused to give in. Referee Pat Russell explained to Molina he would stop it at any minute if he didn’t respond. Long time trainer, Joe Goossen said something that Molina has lived his whole career by “…you gotta swing with him, it’s your only chance.” Seconds later, Molina collapsed to the floor as fans and many members of the media took their feet, “their guy” had won.

Rarely do I want to see a guy go to the gallows. Molina went in the fateful eleventh round, but if ever a man deserved a shot, it was Molina. The man who spent a career fighting from behind and pulling out wins with one single punch felt the worse for wear as a single punch seemed to change the course of a bout he was winning early. Molina never once complained and never once looked for a way out. What he gave, along with Matthysse, was a brutally classic modern StubHub Center slugfests. Whatever you may have thought before about Molina, he deserves accolades for going out and giving it his all. Even when faced with adversity that most would give into to, Molina kept going. No matter how I frame it, I cannot question the heart of John Molina who deserves his spot in boxing folklore as a man who always gave an honest account of himself in the ring, which is far more than most can say for themselves.