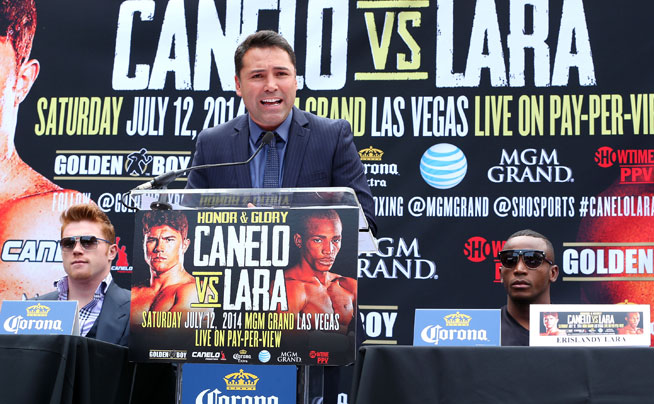 It is frustrating being a boxing fan sometimes, especially if you are simultaneously a fan of the three major American sports. There are plenty of examples in which being a fan of all three major sports can cause frustration to a boxing fan, mostly in the way that the teams in their respective leagues can’t duck one another. But it is also upsetting to see the amount of coverage each sport gets during a given season.

The reason isn’t just influenced by pop culture, the fact that the NBA and MLB have games almost every day of their seasons provide a constant flow of news and they reap the kind of attention that necessitate daily dedicated programming.

Boxing, on the other hand, isn’t quite as consistent, at least not at the highest level and certainly not in the most commercially appealing sense. With the most popular fighters fighting a combined handful of times a year, boxing news just isn’t frequent enough to garner weekly programming.

That tends to leave the mind to wonder precariously, and once left to its own devices the mind begins to rationalize the kind of things that often go understated.

That is perhaps why I continue to let my mind race when it comes to the July 12th showdown between Saul “Canelo” Alvarez and Erislandy Lara, a fight worthy of the ShowTime PPV tag it has been given, at least in the eyes of hardcore fans.

The fight itself is an interesting matchup from a style perspective and the action could be immense come fight night. But it is the implications the fight possesses that stimulate my thoughts on the fight.

While the fight maintains certain implications within the realm of boxing as a whole, and certainly within the 154lb division, the repercussions of the outcome could be felt outside of the ring in dramatic fashion and the consequences could prove detrimental to one side or the other.

There are the obvious consequences on the fighters themselves.

For Canelo, a win could give him the kind of authenticity that would resonate with boxing fans that still have their doubts about his stature as a world-class fighter. It could also help him to get a second crack at Mayweather, and the reasoning wouldn’t be purely economic because if he could defeat a pugilist like Lara, then it stands to reason he would be favored slightly better than he was in his first fight with Mayweather.

Beating Lara wouldn’t make Canelo the favorite against Floyd, but it would infer that he is a better fighter now than he was the first time they met.

A win for Lara would be huge for his career and could potentially set up yet another big fight, this time with the likes of Mayweather Jr. or perhaps the winner of Cotto-Martinez, at the very least it puts him in a better financial position from that point on, including a potential rematch with Canelo.

A win for Lara is just as significant for his career as a loss would be for Canleo. It would essentially setback Canelo in a way that could linger. It would certainly give firepower to the Canelo doubters and it could lessen his appeal as a mainstay boxing attraction outside the Mexican/Hispanic demographic in the U.S.

However, there is a much deeper consequence for either scenario. For months now the hot topic in boxing has been the internal beef within Golden Boy Promotions, specifically between Oscar De La Hoya and CEO Richard Schaefer. The friction has spilled out into the media and the rumor mill has been churning out some potentially accurate portrayals of what’s to come.

The most significant innuendo is the possibility of Schaefer branching out on his own and starting a promotion with Al Haymon fighters as the core of his stable. While De La Hoya has been more optimistic about settling things with Schaefer — he recently told Thaboxingvoice.com that things were being worked out between Schaefer and himself — others believe it is only a matter of time before the Schaefer-Haymon force becomes a fierce rival to all other promotions, especially Golden Boy.

If that is the case then Canelo-Lara is perhaps the first major battle in what could become the most destructive event to ever transpire in the history of boxing.

This fight essentially pits the new Oscar De La Hoya oriented version of Golden Boy versus Al Haymon and his reign as the most influential man in the sport today. That puts all sorts of pressure on both fighters, whether they recognize it or not.

Canelo is not an Al Haymon fighter, so whatever plans Schaefer intends on pursuing outside of the Golden Boy banner it is apparent he will have to do so without the confidence of Canelo’s star power.

If Lara, who is an Al Haymon fighter, pulls off the victory then Haymon will have someone who represents a clear future at the top of the sport once Floyd Mayweather Jr. makes his inevitable and ever approaching departure.

Since Haymon began working with Mayweather all those years ago he has made tremendous strides in the boxing world, signing some of the best fighters and prospects the sport has to offer. Also, he has become a pop culture accessory amongst fighters and the significance of signing with Haymon is validation for skills, market appeal, and potential economic growth as a brand (it’s essentially the cool thing to do, along with the most lucrative business move).

However, Haymon’s appeal extends further with Mayweather and having that marquee name gives him more juice than if he didn’t have it. The other major stars in the sport, Manny Pacquiao and Canelo, are not represented by Haymon, which leaves Haymon’s allure threatened when it comes to locking up the biggest paydays the sport has to offer.

Floyd and Manny will be gone sooner than any of us are probably ready for, and that will leave only Canelo to take the sole reigns of the cash cow position. That is bad news for Haymon, who has never had a great relationship with De La Hoya.

This fight represents an opportunity for Haymon to construct a star out of Lara, should he win. He can easily build off of the win and while Lara may never be the kind of attraction De La Hoya, Julio Cesar Chavez Sr., or Mayweather were, having a win over the it guy a few years from now is enough to work with, and remember Mayweather was never the star he was today until he beat De La Hoya, neither was Pacquiao for that matter, who also needed a win over De La Hoya to launch his career into mainstream stardom.

There is a lot more on the line than we all think, whether it is being openly discussed or not. If Golden Boy becomes divided in the next few months or years, then De La Hoya can find solace in Canelo—a legitimate star with legitimate skills.

But Haymon can relinquish any kind of commitments if he is in the position to do so and if Lara isn’t successful then only time will tell how resourceful Haymon is once he is forced to deal with a few less cards in his hand.