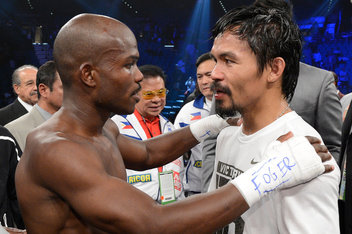 We are now less than a week removed from Tim Bradley’s impressive victory over the legendary Mexican champion Juan Manuel Marquez and it seems that he is finally starting to get the credit that he deserves as a top level fighter. “The reception that I’m getting from this victory is unbelievable. It’s quite different than the Pacquiao fight. I’ll tell you that much. It’s a major difference. A lot of people are showing a lot of love and respect and a lot of appreciation for what I did in that fight, beating a legend like Marquez. It just definitely gives me a couple of steps closer to my ultimate goal in being the best pound for pound fighter in the game. Like I said it just adds to my resume man,” claimed Bradley.

Going into the fight with Marquez , one big question that was being asked was: How would Bradley be after his violent war with the tough Russian Ruslan Provodnikov and if he had suffered any residual affect from the punishment that he sustained in that fight? Although Bradley is a highly skilled boxer, he does occasionally like to stand and trade with his opponents. People weren’t sure if he would chose to do that in the fight with Marquez. “I followed the game plan to a tee. I didn’t go out there on my own. I definitely did what I was training to do. I listened to my trainer Joel Diaz and my team and I told them I needed to box smart in this fight and that’s what I did. I just boxed smart and used my jab. I controlled him with my jab and dropped faints on him, and I was able to make him commit and make him pay at times. I said my speed was going to be a factor in this fight and that was the factor, my speed,” he explained.

Even after winning possibly the biggest fight of his career against Marquez, questions about his controversial win over Manny Pacquiao still lingered. Bradley shared his thoughts on the topic and went on to say, “This fight I had both my feet under me and you see how my movement was and how I was able to get in and out and do my thing. In the Pacquiao fight I didn’t have that mobility at all, so it definitely affected my performance in that fight, and although I still won, a lot of people don’t feel I won that fight. I would love to definitely go back and revisit that chapter now and fight Manny Pacquiao again and beat him.”

Nothing is a sure thing in boxing and we don’t always seem to get the fights that we want. It’s not a given that Pacquaio will win his fight on Nov 23 against Brandon Rios. If a rematch with Pacquiao ends up not materializing and Marquez chooses to continue on with his boxing career, a rematch with Bradley seems like a realistic option, but Bradley isn’t one hundred percent sold on that idea at the moment. “I would just have to keep that door open basically from a business standpoint but me personally, after the whole thing and after him saying what he said, he got robbed and all this crap, it almost makes me feel like not giving him a rematch. I would definitely think about it but as of right now I’m not even thinking about Marquez, and I’m not thinking about a rematch either.”

Regardless of who Bradley decides to fight next, at least for now he can savor the moment and finally receive the credit that he deserves for a hard fought well deserved victory over a great champion.