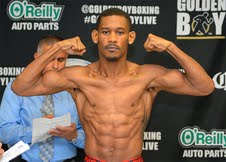 Danny Jacobs is taking on Jarrod Fletcher of Australia on Aug 9th on the undercard of the Danny Garcia vs Rod Salka, knowing that if he wins he will be the mandatory challenger for undefeated, hard hitting, Kazakh boxer Gennady Golovkin.
in a recent interview with ThaBoxingVoice.com, Jacobs head trainer Andre Rozier was asked if that bout was something his fighter would want to take after seeing how badly GGG had handled Daniel Geale and how they were knocked out by Pirgo.  Andre pointed that it all goes down to the psychology of the sport.
“Well my thing is this, when we fought Pirog, Danny was in a really bad place, he had just lost his grandmother who was more like his mother figure, and his head really wasn’t there. He didn’t even want to be at the fight at that point in time, she passed away when he was in Las Vegas, and he was a youngster at the time that was a lot for a young man to bear and everyone isn’t the same. It takes a very, very special person to fight with all of that on their table, and although he did get caught with that shot that put him down, he was still doing a fantastic job after the first round of the fight, actually he was winning the fight, so he’s in a different place now. He’s a cancer survivor, he’s seen death right in his face, literally seen it coming to him and his mentality now is like, Gennady Gelovkin and?? (so what).”
He went on to say that Jacobs knockout percentage was similarly high to Gennady’s; out of Danny’s 27 fights he has 24 KOs but he also believes his fighter is the faster and sharper of the two, He went on to guarantee the speed and power combinations would get GGG’s attention but he did concede that there wasn’t any comparison when it came to the two fighters resumes.
Tweet