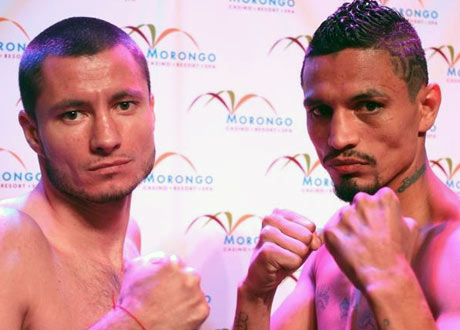 Starting out ESPN’s Friday night fights, undefeated Jose Pedraza (13-0) versus Gabriel Tolmajyan (13-2-1). The fight started with Pedraza on the defensive and trying to counter the more active Tolmajyan. In round 2 the tide began to turn and they changed places, now Tolmajyan is the counter puncher. Pedraza began to use his speed and mixed it up rather well. He established a jab, then he added to it following it up with a left hand and then he would lead with a right hook. This kept Tolmajyan confused as Pedraza walked away with the first 5 rounds.

Mid fight Tolmajyan finally started landing some counters and drew first blood with a stiff right hand. After midpoint Tolmajyan was definitely landing the more clear and powerful punches. At the end of the 10 rounds Teddy Atlas had the fight a draw. He gave first 5 rounds to Pedraza and the last 5 to Tolmajyan. While Facebook users had the fight scored 6-4 in favor of Pedraza. The official score from all 3 judges was 97-93 unanimous decision for Jose Pedraza.

Rustam Nugaev (24-6) went to war against Jose Hernandez (14-6-1) in the main event. There was no “feeling out” round for these two. They ran out like soldiers on the front line. Trying to slow the faster Hernandez, Nugaev is digging hard to the body and often. Every time Hernandez throws a hook, Nugaev’s shorter punches get their first. Don’t get me Hernandez is landing some great punches himself its just not enough to keep Nugaev off of him. It was finally to much for Hernandez to take. He took a knee after a flurry of punches and didn’t get up. I know Hernandez was taking a lot of punishment but the end of the fight appeared as more of a forfeit than a KO lose.

Due to the mainevent ending early we were treated to Roy Tapia (5-0-1) versus Eliezer Agosto (2-2). Watching Agosto you wouldn’t think he only has only 2 wins under his belt. Regardless he put Tapia to the test. Tapia hurt Agosto badly with a hook to the body that dropped him in round 3. Agosto made it to his feet only to be trapped in a corner and dropped again. The ref stops it and Tapia is now 6-0.