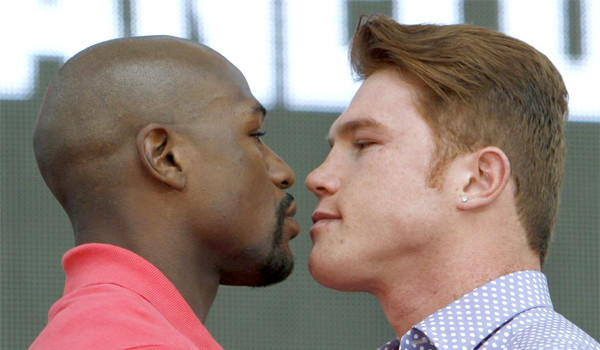 Now that we are less than three weeks away from the biggest fight of the year and potentially one of the biggest fights ever, at least from a financial stand point, boxing fans and pundits alike are chiming in with their picks and opinions on who will win when WBC Super Welterweight Champion Saul “Canelo” Alvarez and pound for pound king Floyd “Money” Mayweather meet on Sept. 14.

The odds are a lot closer than they have ever been in recent years for a Floyd Mayweather fight, but will any of that really matter at the end of the day?

I have been hard pressed to find few if any who are giving Alvarez a chance to beat Floyd Mayweather. Even die hard Mexicans are saying that their heart is with “Canelo” but their money is on Floyd.

It seems pretty much the same as in other Floyd Mayweather fights. Even though Mayweather has many detractors from a personal standpoint, he has earned just about everyone’s respect when it comes down to his superior boxing ability. A lot of people many be rooting against him but in truth they know that it’s a tall task for anyone to truly beat him.

Can Alvarez be the one or at least do better than Mayweather’s most recent opponents?

Robert Guerrero, Mayweather’s last opponent on May 4, barely won a round against Floyd. Although Alvarez is bigger and presumably hits harder than Guerrero, it can be argued very strongly that Guerrero has a much better resume and has had much more experience at the top level than “Canelo.” WBA Junior Middleweight Champion Austin Trout arguably is the best opponent on Alvarez’ resume and outside of him “Canelo” has fought a lot of smaller shopworn fighters that he was supposed to beat.

Will one big test be enough to prepare him for the biggest fight of his life? Golden Boy Promotions owner Oscar De La Hoya seems to think so, but he has a history of picking against Floyd Mayweather and has been wrong every time. Admittedly De La Hoya had said that he has a thorn stuck in his side dating back to when he met Mayweather back on May 5 of 2007. There was a lot of bad blood between the two of them throughout the whole promotion leading up to that fight which possibly still exists today.

Regardless of how anyone feels about Floyd Mayweather as a person, he has earned the right to be called the best boxer on the planet. Saul Alvarez will be looking to change that on Sept. 14. Whether or not that happens, let’s hope the odds makers are right this time and we get a competitive fight.