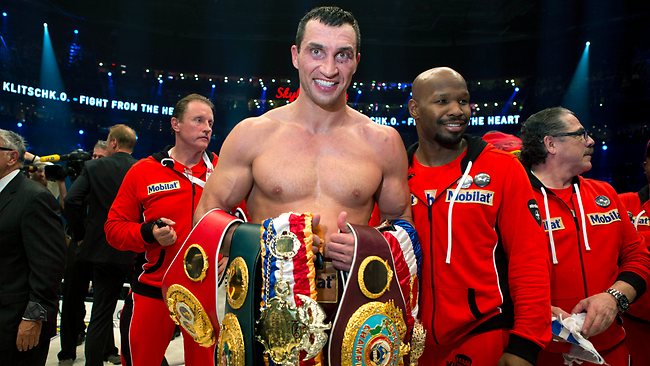 One would be hard-pressed to find a single person who thought Alexander Povetkin (26-1, 18 knockouts) would emerge victorious in his October 5th fight against heavyweight kingpin, Wladimir Klitschko (61-3, 51 knockouts). Instead, the point of discussion was whether Povetkin would be stopped, and if so, when? Ultimately, Provetkin proved a lot of nay-sayers wrong. Sure, he lost the bout in a fairly one-sided fashion, but the fact that he managed to last twelve rounds against an opponent as frustratingly patient and dominant as Klitschko is impressive in and of itself.

In the build-up and to the opening moments of the bout, one couldn’t help but notice the disparity in size between the two fighters. Ultimately, it was Klitschko’s length which was Povetkin’s main concern as his gameplan revolved around getting on Klitschko’s inside in hopes of rendering his significant reach advantage useless. For the first minute of the opening round it seemed to be working, but in a manner that was as surprising as rain in Seattle, Klitschko managed to quickly take control of the bout with his telephone-pole jab and in-ring IQ.

Still one couldn’t ignore Povetkin’s sheer determination in taking the fight to the Ukrainian as he was willing to risk it all just to land a big shot. Just as Povetkin began gaining some momentum behind him in the second, Klitschko managed to knock him down with a short hook. From this point forward, Klitschko was absolutely dominating the fight, but not in a manner one would normally expect. Rather than engaging the hard-charging Russian, Klitschko relied on his jab and his weight to win each of the twelve rounds. It was this constant leaning and pushing on Povetkin that left the packed house in Russia booing, and at one point even chanting in favor of Povetkin.

As the fight went on, Povetkin’s chances at victory continued to slip away. Suddenly, the focus was now on the fact that Klitschko seemed to be showing the signs of fatigue through the middle rounds. Just as Povetkin attempted to touch-up the tired Klitschko, the Ukrainian quickly abused his unpopular leaning tactic. Each of his jabs was immediately followed by a clinch or lean on Povetkin. Everyone in attendance and watching the fight at home grew tired of the cautious tactic, but it seemed the referee didn’t mind the constant pauses in action.

The crowd continued raining down “boos” as the bout approached its final rounds, and this finally seemed to inspire action from the Klitschko. After scoring a questionable knockdown against Povetkin at the start of the seventh round, Klitschko managed to knock the Russian down two more times in the same round, thus already cementing his lead on the judge’s scored cards.

Just as Klitschko sensed the lead however, he went back to the tactic that led him through the first six rounds of the bout. This led to the already desperate Povetkin to come out even more aggressive, but with his legs already taken from him it was obvious that his best efforts were futile. Once again in the ninth round, Povetkin was knocked down from a “punch” that appeared to be more of a shove. Still, the look of disappointment was obvious on his face, but Klitschko didn’t look to confident either.

The final two rounds proved to be the most dramatic moments of the bout which really sums up the dragged-out nature of the bout. Early in the 11th, Povetkin caused Klitschko to briefly trip on a logo. This was immediately taken as a stumble by Klistschko due to one of Povetkin’s punches, and it sent the crowd and members of the broadcast team into a ruckus as they were convinced that Klitschko was hurt. The excitement was proven premature, and the next high point of the bout seemed to be when the ref finally docked a point from Klitschko for his constant holding and pushing. This infuriated many as Klitschko had been doing this the entire bout, and it wasn’t until the eleventh round that the referee finally decided to discipline the fighter on the matter.

As the twelfth round passed, the collective sigh could be heard from across the stadium. The judges scored cards had Klistchko pitching a shut-out on scores of (119-104), (119-104), and (119-104). Although dominant, this victory over Povetkin will undoubtedly be the topic of many a debate as it forces one to question Klitschko’s standing amongst the all-time greats of the division, and whether one can ever find truly competent judging and refereeing in boxing these days. It’s a bout that did little but waste time and leave fans with more questions than answers, but all one can do now is hope that another match-up will come along to rid our memories of Klitschko vs. Povetkin.