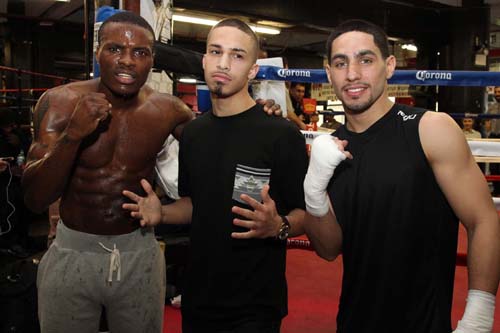 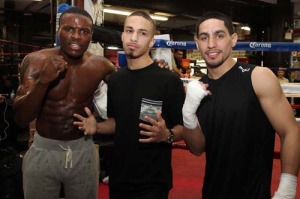 BROOKLYN, N.Y. (December 1, 2014) – The year 2014 has been good to Zachary “Zungry” Ochoa (8-0, 4 KOs) both in and out of the ring. With three wins this year, and hopes for a fourth on Saturday, Dec. 6 at Barclays Center in his hometown of Brooklyn, NY, Ochoa has gained valuable experience and countless fans in the last 12 months.

The 22-year-old Ochoa, who grew up in the Williamsburg neighborhood of Brooklyn, is his parents’ middle child. After dropping out of high school, Ochoa was arrested at the age of 16 for getting into a fight. After seeing the disappointment on his mother’s face, Ochoa determined that it was time to reform his troubled ways.

“I was no stranger to trouble when I was younger,” said Ochoa. “I would get into fights all of the time, and eventually it got to the point where I realized that I had to make some serious changes.”

Although Ochoa has always been very close with his mother, it was his father who pushed him incessantly to reach his potential as a boxer. Ochoa turned professional the same day he received his high school diploma in 2010. By the beginning of 2011, he was preparing for his first professional bout. On September 10, 2011, Ochoa fought his first bout as a professional and recorded a technical knockout win over William Ware at the Aviator Sports Complex in his Brooklyn.

Now, three years after his professional debut, Ochoa has developed into one of the most promising prospects in the sweet science today.  In January 2014, Ochoa signed on with Golden Boy Promotions, and feels the sky is the limit.

Since signing with Golden Boy Promotions earlier this year, Ochoa has worked diligently to keep his perfect professional record intact. On January 30, he defeated Jose Valderamma at Barclays Center by unanimous decision. Ochoa then recorded a technical knockout victory over Hector Marengo on April 19 in Washington, D.C., and on August 9 he tasted victory for the third time in 2014, again at Barclays Center, with a unanimous decision over Luis Cervantes.

Along the way, Ochoa has been no stranger to social media, taking to Twitter and Instagram to help grow his fanbase.

“When I first discovered Instagram I thought someone had created the app specifically for me,” said Ochoa. “I love the idea of a photo-based app and I just started posting anything and everything. Then I posted shirtless pictures of myself, and that really seemed to gain me followers. So I ran with it.”

Ochoa, who now has nearly 90,000 followers on Instagram, has said that one of the greatest advantages of his social media engagement has been his increased ability to reach fans all over the world. That access to fans, regardless of his geographic location, has helped his popularity skyrocket in 2014. The pugilist even got some work during New York Fashion Week 2014 after members of the fashion industry discovered him on Instagram.

Additionally, in recognition of Ochoa’s increasing popularity, fans of the Brooklyn boxer will be able to purchase discounted tickets to sit in a special section of Barclays Center called “Zachary’s Corner” on fight night. By visiting www.ticketmaster.com and entering promotional code “OCHOA” fans can purchase discounted tickets to sit in section with other avid Ochoa fans and can expect special giveaways and an appearance from Ochoa himself.

On December 6, in his fourth fight at Barclays Center, the hometown sensation will get a shot at a fourth victory in 2014 when he faces Carolina, Puerto Rico’s Jose Castro (4-1, 2 KOs) in a six-round bout. If Ochoa emerges from the ring victorious on December 6, 2014 will undoubtedly be a year the fighter will not soon forget.