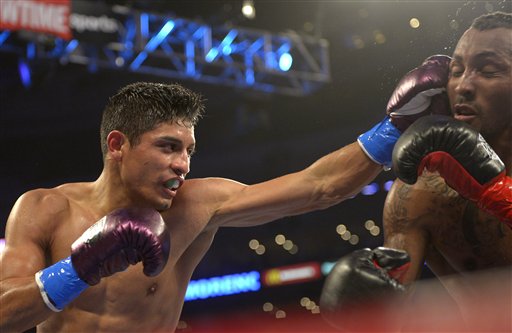 My feelings toward Abner Mares the day after his win against heralded 118lb titlist Anselmo Moreno would best be described by paraphrasing the famous Dennis Green tirade on Monday Night Football because Abner Mares is who I thought he was. He’s a guy with the ability to win and a graduate from the Malcolm-X school of boxing, doing anything necessary. Is he the most talented fighter on earth, the most technical, the best defensive, or most athletic? The simple answer for all of those questions is an emphatic NO. To go further, Mares has some serious flaws in his game and it would be very unlikely to ever see him atop the pound for pound list. But who cares?

He’s a genuine star in a market with some tough shoes to fill and I believe he is the next Mexican star, perhaps never eclipsing Canelo and at the same time he has the tools to gain some crossover success. Although we’ve seen Mares come up with some big victories, this latest victory has further authenticated his status as a legitimate fighter more than any other because this was his first fight against a top 10 pound for pound opponent.

His stock has never been higher and Mares knew that as he publically challenged the number 1 fighter in the division Nonito Donaire. Not only did Mares challenge Donaire, but he also challenged his promoter Bob Arum in a very theatrical manner. I assume everyone is hoping the stunt worked and the fight between number 1 & 2 in the division can finally come off.

Most will rationalize the fact that it’s the sort of thing that happens in sports, the best fighting the best; the potential Donaire-Mares fight would also be very lucrative for Mares and it’s a fight that both HBO and Showtime have expressed interests in obtaining.

I was all for this fight and have been for some time, that was until Leo Santa Cruz expressed his interests in moving up to 122lbs. I understand the nature and gravity of a fight like Donaire-Mares, and by all means Abner deserves it. However, it isn’t the money fight that most think it is. I’m not talking money in the sense of currency, but “money” like what you say after sinking a 3-ball during a pickup game.

If you look at the landscape of both fights I think you’ll find that the one that makes sense is the one that keeps the money in house for Golden Boy.

The fact is while Donaire and Mares seems great on paper in reality it isn’t all that great of a fight. Mares has the ability to win and that is a very important and empowering trait. It can be the kind of thing that makes a difference between equally skilled fighters and in some cases it can be enough to win a fight against an opponent with superior skills in several categories. But knowing how to win isn’t everything and when a fighter is much more talented it knowing how to win becomes obsolete as you learn to lose.

Mares did things against Moreno that weren’t pretty; Mares was able to stifle his opponent’s game plan and he succeeded in making Moreno fight the kind of fight Mares wanted. With Donaire however, he probably wouldn’t have that same success. Donaire is much more skillful and athletic which makes the margin of era for Mares much smaller.

Enter Leo Santa Cruz, whose fight on the Mares-Moreno card was exciting and impressive. A fight between Santa Cruz and Mares is the fight to make and it has much greater possibilities for being the better fight. The nature of Cruz’s style is both brutal and relentless. Cruz is the kind of fighter that can be exciting regardless of his opponent. His constant pressure is the assurance for exciting fights and if you add to the equation a fighter that can match Cruz’s ferocity then it could produce the type of fireworks that are remembered throughout the ages. That fighter is Mares.

These two men are much more equals then Donaire and either fighter, it’s also closer to a tossup kind of fight. This is a fight with the potential to surpass any other in terms of action and explosiveness, add to it the fact that Mares has the will to win and Cruz has the heart of a champion and you’ll find that it has the makings of a back and forth slugfest surpassing the expectations of Rios-Alvarado (that says a lot to me).

Donaire-Mares may mean bigger ratings, but Mares-Cruz is better business for both fans and promoters. I admire the fact that Mares wants to prove he’s the best and it is one sure fire way of making him the premier fighter in the division, which in turn would mean greater paydays and larger audiences. But another way of doing it is to produce meaningful fights that transcend the sport and offer fans the kind of memories that resonate for years. Gatti was never the cash cow or the best fighter in a particular division, but he is a legend in the sport because he produced the kind of action that eclipses commercial appeal.

Mares can’t forget that his sport is the business of fighting and being remembered doesn’t have to be accomplished in the span of an entire career. Football and basketball determines its heroes over years of superb play, that kind of feat can transpire in one fight and if you do it on a consistent basis then you may find yourself on a Hall of Fame ballot one day, regardless of trinkets or record books.

I submit that Mares-Cruz is as meaningful and important for the sport as any fight in Donaire’s sights. Furthermore, these two Mexicans in one ring have the potential to enter a realm that is as unattainable as any feat sports have to offer.

So if Mares and Cruz want to be remembered then they have the options in front of them. They can go into a fight, determined to win, and exemplify the iconic nature of their predecessors by producing the kind of epic showing that would raise both men’s stock as well as giving the winner a chance at legendary status. Or they can take the easy route and put on boring fights for years against opponents with alphabet belts and try to hang on to their undefeated records by carefully picking the kind of opponents that are low risk-high reward (I’m kidding when I say easy, but I admire Gatti more than I do Mayweather).

Let’s forgo the obvious Donaire-Mares for the obviously superior Mares-Cruz, I couldn’t think of a fight I’d want more. Perhaps I’m biased, but as a member of the fastest growing demographic in America shouldn’t my vote count more?