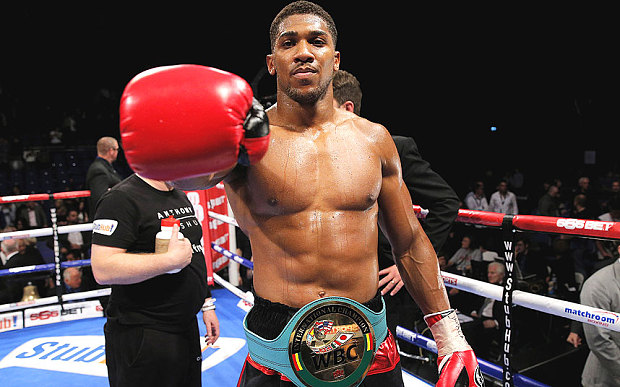 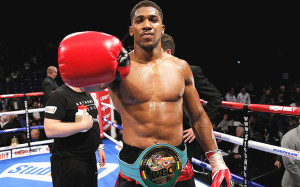 Anthony Joshua it seems is one of the most talked about heavyweights in today’s boxing world despite only being a prospect. The physical specimen has been a star ever since he won gold in 2012, but through 14 fights as a pro, he never seemed to be tested. That changed tonight at the O2 Arena.

In a much-anticipated grudge match, Anthony Joshua was pushed to the limit, and for the first time of his career, was hurt and had to fight in the trenches against an opponent who simply would not go away.

Joshua improved to (15-0, 15 KOs) by knocking out rival Dillian Whyte (16-1, 13 KOs) in the seventh round in an exhilarating fight that saw action from the opening bell. It appeared to be another normal Joshua fight, absolutely battering Whyte in the 1st round, looking to end the contest early.

When the bell rang at the end of the first round, a few shots were landed by Joshua after the bell, causing Whyte to retaliate by going after AJ throwing a huge overhand right that nearly hit the referee and Joshua. A brawl nearly broke out in the ring, as a result, with members of Whyte’s team entering the ring. Thankfully, no one was injured, and the fight continued.

AJ thought he was having another easy day at the office in the second round. However, all of the sudden: Whyte shook him. Joshua wasn’t severely hurt, but he was definitely on shaky legs for rounds three and four, very weary of Whyte’s power, who knocked him down when they fought in the amateurs.

From rounds five to six, Joshua took back control of the fight, landing at will on a tired Whyte. There was a point in this fight it looked like no matter what AJ threw at Dillian, he just would not go down: until the seventh round.

After Joshua had landed a big right hand, Whyte tried to move out of the way, but his legs gave him the classic buckle, and the arena sensed that the end was near. Joshua threw a barrage of punches at that point, hurting him with everything he threw.

The finish was spectacular, Joshua landed a beautiful uppercut after backing Whyte into the ropes with several right hands. Whyte was down and out, looking out of it. The ref wisely waved the count, and Joshua secured the most important win in his career thus far.

Joshua showed something in this fight; he proved that he can get in a dog fight and win one. Whyte proved to be a tough, strong heavyweight who should be a future contender in no time. The question now is where does Joshua go from here?

He can face the winner of Tepar-Helenius, or face a veteran contender, or he can have a rematch with Whyte, something he mentioned immediately in the post-fight interview. The bad blood remains between the two, with Whyte exiting the ring without congratulating Joshua or showing a sign of respect.

Joshua stayed on track of his journey of becoming the next great heavyweight, but for the first time as a professional, we saw Joshua hurt and weary of another mans power. Did Whyte expose a questionable chin by Joshua, or is Whyte simply a terrific power puncher and Joshua showed an excellent chin by taking Whyte’s punches? Only time will tell. Thaboxingvoice had AJ up 58-56 at the time of the knockout.

Undercard Results
The undercard for this card was filled with solid, world-class veterans and young and rising stars such as Luke Campbell, Paulie Malignaggi, Tony Bellew, Chris Eubank Jr, Kevin Mitchell, and several others.

In the co-main event, we saw Chris Eubank Jr (20-1, 15 KOs) face off against Irishman Gary “Spike” O’Sullivan (22-1, 15 KOs) in a middleweight bout for the #1 spot in the WBA rankings. The winner of this bout would likely get a title shot against one of the current WBA middleweight belt holders (Golovkin or Jacobs.)

This was an extremely fun one-sided fight, won by Eubank after O’Sullivan’s corner retired him after the end of the seventh round. It was a wise choice, as Spike’s punch output completely fell off after the third round, and was simply eating punches after that point.

There were several memorable exchanges during this fight, Eubank on the better end of most of them. However, Eubank did leave himself open a lot, and Spike made him pay for it occasionally, landing left hands at will early in the fight.

Eubank is now the #1 WBA middleweight contender, and will need to step up his game against whatever champion he faces next. After seven rounds, Thaboxingvoice had Eubank up 69-64 when O’Sullivan’s corner immediately retired him, without even giving him a chance to dispute.

Two upsets occurred in the lightweight division on this stacked card. Kevin Mitchell (39-4, 29 KOs) was stopped by unheralded power puncher Ismael Barroso (19-0-2, 18 KOs) in the fifth round of their interim WBA world lightweight title bout.

Barroso, despite not having any notable names on his resume, came into the fight with an impressive knockout percentage and Mitchell seemed aware of this from the very beginning. Kevin came out cautious, not throwing much of anything, before being knocked down in the fourth, and twice more in the fifth.

It was a good stoppage by referee Howard John Foster, as he gave Mitchell a chance to fight back, but ultimately, ended the bout when he realized that Kevin had nothing left. Barroso proved to the boxing world that he is a serious power threat at 135. Thaboxingvoice had Barroso up at the time of the stoppage 40-35.

Campbell was knocked down in the fifth round by a left hand, and took punishment from Mendy all night, as Mendy was never bothered by any of Luke’s punches, and earned a hard-fought, well-deserved victory. Campbell, despite taking a step back with his first career defeat, displayed excellent perseverance, and a superb chin to hang in there for the full twelve rounds. Thaboxingvoice scored the contest 115-112 for Mendy.

The fight was very slow and unentertaining for the most part but did have a good finish, with both men becoming more aggressive and willing to engage. Bellew was on the verge of possibly stopping Masternak in the closing seconds of the twelve, but Mateusz survived till the final bell. Both men were fairly wild in this fight, missing a lot of punches. Thaboxingvoice scored this bout 115-113 for Tony Bellew.

The card started with Paulie Malignaggi displaying an impressive display of boxing as he usually does against an outclassed, but game opponent in Antonio Moscatiello. Paulie won by scores of 120-108, and 119-109 X2. Thaboxingvoice scored the fight 118-110 in favor of Malignaggi.

In a heavyweight bout, former world title challenger Dereck Chisora was back in action for the second time in as many weeks. Chisora (24-5, 16 KOs) stopped journeyman heavyweight Jakov Gospic (16-14, 12 KOs) by third round stoppage in a gross mismatch, in what was more of a sparring session for Chisora than actual fight.