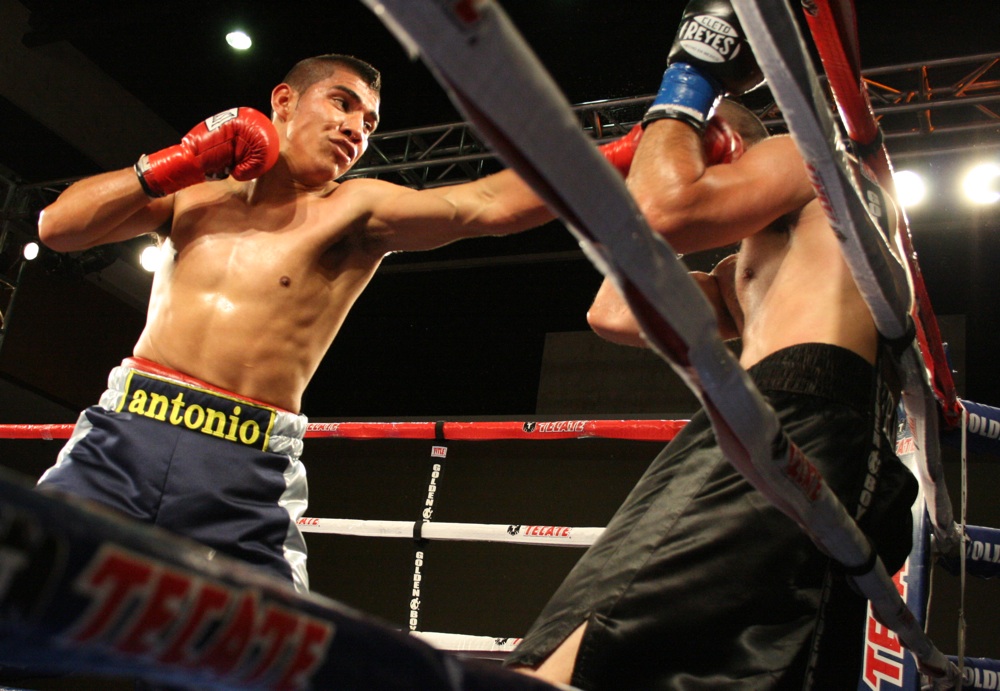 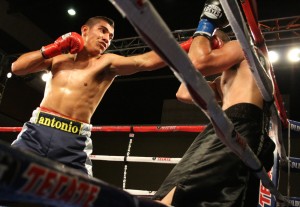 Fresh off an exciting victory over former three-division world champion, Humberto “La Zorrita” Soto on the undercard of Matthysse vs. Postol on Oct. 3, “Relentless” Antonio Orozco (23-0, 15 KOs) is ready to gain a shot at a world title in 2016 when he takes on former WBA Super Lightweight World Champion Miguel “Aguacerito” Acosta (29-8-2, 23 KOs) on March 25. The 10-round welterweight fight will be broadcasted live nationally on Boxeo Estelar on Estrella TV, from Fantasy Springs Resort Casino in Indio, Calif.

“I’m excited to get back in the ring on March 25,” said Antonio Orozco. “I have had some great fights at Fantasy Springs Resort Casino and on Friday, March 25, I’m preparing for a great one as well.”

“Antonio Orozco had a fantastic year in the ring in 2015, defeating veteran Humberto ‘La Zorrita’ Soto and top contender Emmanuel Taylor,” said Oscar De La Hoya, chairman and CEO of Golden Boy Promotions. “We have high hopes for Antonio in 2016 and believe he is on a path to fight for a world title soon. His next fight against Miguel Acosta on March 25 will get him one step closer to that goal.”

Undefeated top prospects round out the non-televised undercard, which will stream live on Ring TV. First, Jason “El Animal” Quigley (9-0, 8 KOs) of Donegal, Ireland is scheduled for an eight-round middleweight bout; St. Louis, Mo.’s undefeated welterweight KeAndre “The Truth” Gibson (14-0-1, 6 KOs) will fight in an eight-round fight; Emilio Sanchez (11-0, 8 KOs) of Pacoima, Calif. will participate in an eight-round featherweight bout; Indio, Calif.’s Marco Magdaleno (2-0, 1 KOs) will be engaged in a four-round event and opening up the night, Whittier, Calif. Pablo “The Shark” Rubio (4-0, 3 KOs) will fight in a four-round super bantamweight bout. Opponents will be announced shortly.

Ranked number five by the WBC and fourth by the IBF “Relentless” Antonio Orozco of San Diego by way of Tecate, Baja California, Mexico holds impressive victories over former world champion Stevie “2 Pound” Forbes and Martin “El Brochas” Honorio, and seasoned fighters Ivan Hernandez and Miguel “El Anestesista” Huerta have propelled Orozco to the top of the super lightweight division. In 2015 Orozco, started off the year with an impressive unanimous decision victory over the dangerous super lightweight contender Emmanuel “Tranzformer” Taylor in May. Orozco showed his boxing skills and dominance in the ring. Most recently, the undefeated fighter was seen in the ring in an impressive unanimous decision victory over former three-division world champion Humberto “La Zorrita” Soto on Oct. 3, 2015. The victory solidified Orozco as a serious threat in the division now on route to obtaining a shot a world title in 2016.

Hailing from Philadelphia, by way of Miranda, Venezuela, Miguel “Aguacerito” Acosta has had a long career full of up’s and downs. A professional since 1999, Acosta became the WBA Lightweight World Champion over then undefeated Urbano Antillon in 2009. The Venezuelan, defended the title once before losing it to Richar Abril in 2011. Since then, Acosta has been fighting consistently looking for another opportunity at a title but has come up short. Now, with a fight against one of the top fighters in the division in Antonio Orozco, a victory could propel him back into the title game.

A professional since 2006, Blythe, California’s Andrew “El Chango” Cancio has had a successful career facing some of boxing’s toughest featherweight contenders. The talented 27-year-old holds victories over perennial contender and 2000 U.S. Olympic Silver Medalist Rocky Juarez, the battle tested Jerry “The Corpus Christi Kid” Belmontes, and is coming off an impressive seventh round knockout of tough warrior Rene “Gemelo” Alvarado.

Hailing from Balleybofey in County Donegal, Ireland, the 24-year-old Jason “El Animal” Quigley had an outstanding amateur career becoming the first Irish fighter to win a Silver medal at the AIBA World Amateur Boxing Championships in 2013. “El Animal” started his professional career in 2014 and has quickly garnered attention by ending each fight via knockout against Howard Reece, Fernando Najera, and Greg McCoy. Quigley has continued his wins-by-knockout streak by impressively taking down Lanny Dardar, Tolutomi Agunbiade, Joshua Snyder and Michael Faulk. Most recently, Quigley fought Marchristopher Adkins in November winning the bout via unanimous decision.

24-year-old welterweight prospect, KeAndre “The Truth” Gibson, of Saint Louis, Mo. who now makes his home in Las Vegas, has become quite popular in Texas, where he won impressive victories over John Nater and Jose Hernandez. In January 2015, Gibson took on Nicaragua’s Nelson Lara winning the fight via unanimous decision. In his second fight of 2015, Gibson faced Jorge Ramos in an eight round fight winning the bout via unanimous decision in the undercard of Canelo-Kirkland on May 9, 2015. Gibson was last seen in the ring on October 2015, defeating Tom Howard via knockout.

Pacoima, Calif.’s super bantamweight Emilio Sanchez made his professional debut in 2013 in first round knockout of Luis Alfredo Rodriguez starting out a string of first-round knockouts throughout 2013. Since then Sanchez has maintained his momentum, showing his power and his intelligence in the ring. 2015 was a busy year for Sanchez, fighting five times in front of his hometown crowd at the Belasco Theater. The 21-year-old is last defeated Juan Hernandez in December 2015 via knockout and will be looking to continue the trend when he fights in his first fight of 2016.
Edgar Valerio is determined to become a force in boxing since making his professional debut in September 2012. Valerio is part of the rising local talent from Los Angeles, and has fought all of his professional fights in the region before a hometown crowd. In August 2014, Valerio secured a unanimous decision victory over Adrian Rodriguez and in his first fight of 2015, Valerio defeated Justin Lopez via knockout. Now, Valerio is ready to continue his undefeated trend when he fights on March 25.

Las Vegas native Marco Magdaleno comes from a fighting family that includes brothers Diego and Jessie, and after a stellar amateur career, the hard-working southpaw from Indio made his professional debut against another newcomer to the game, Lancaster’s Phillip Bounds defeating him via knockout. The 23-year-old fought at Fantasy Springs Resort Casino for a second time in December of 2015 defeating Derick Bartlemay via unanimous decision. Now, the southpaw will be looking to keep his undefeated record when he fights in front of his hometown for the third time.

Hailing fromWhittier, Calif., Pablo Rubio Jr. fought three times in 2015 after making his professional debut at the June 4 edition of LA FIGHT CLUB with a win against Julio Rodriguez. Previously, Rubio fought in the 2014 USA Boxing Junior and Youth Open in the youth lightweight class at 123 lbs., and has sparred with the likes of undefeated World Champion Leo “El Terremoto” Santa Cruz. Rubio is determined to make a strong start for his second year as a professional fighter with another victory in 2016.

Antonio Orozco vs. Miguel Acosta, is a 10-round welterweight fight presented by Golden Boy Promotions and sponsored by Cerveza Tecate, BORN BOLD. The Boxeo Estelar broadcast will air live on Estrella TV at 10:00 p.m. ET/7:00 p.m. PT. The card will also stream live on EstrellaTV.com and on YouTube via Fenomeno Studios. The Ring TV live stream will begin at approximately 5:30 p.m. PT through 7:00 p.m.