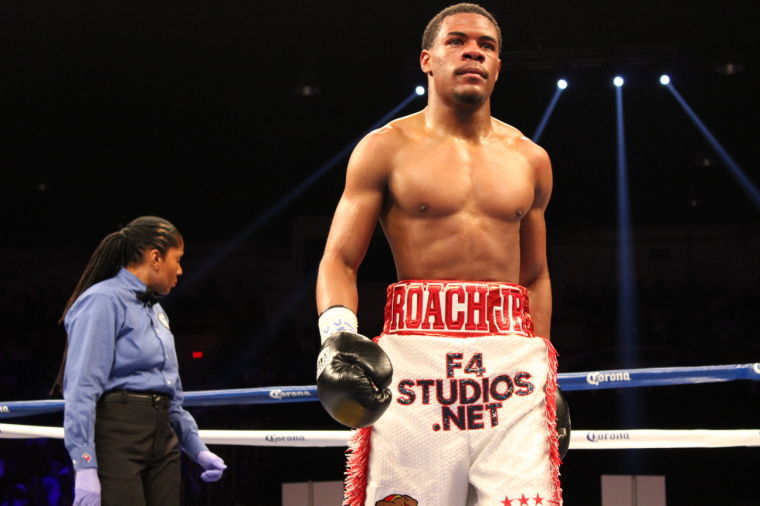 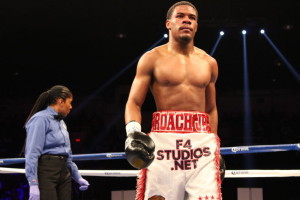 The non-televised undercard of Luis Ortiz vs. Tony Thompson will feature exciting top prospects from the East Coast for an exciting night of boxing on March 5, live from the DC Armory. First off, undefeated lightweight, Lamont Roach Jr. (9-0, 3 KOs) of Washington, D.C. will participate in a six-round fight and new Golden Boy Promotions fighter Rashidi “Speedy” Ellis (14-0, 11 KO) from Lynn, Mass. will fight in an eight-round welterweight bout.

Washington, D.C.’s Lamont Roach Jr. has been active fighter since his professional debut in 2014. In 2015, Lamont Jr. nearly doubled his professional experience with four victories against Herbert “Sensational” Quartey, Jose Miguel Castro, Christian Santibanez, and Jose “Flash” Bustos. The 20-year-old super featherweight prospect is a fighter to watch in 2016.

A professional since 2013, D’Mitrius “Big Meech” Ballard has quickly risen the ranks in the light heavyweight division. 2015 was a pivotal year for Maryland’s super middleweight for “Big Meech” as he passed every test with flying colors, showing that he could box as well as bang in decision victories over Josue “Chiquilin” Ovando, Juan Carlos “Chiflado” Rojas and Fabiano “Pit Bull” Pena in 2015.

Kevin “K-Smoove” Rivers, Jr. of Cheverly, Maryland is eager to get back in the ring after his first career loss. The fighter has been steadily moving up the ranks accumulating wins over other stand-out prospects, Xavier Montelongo and Karl Garcia in 2014. In early 2015, the 25-year-old had impressive technical knockout victories over Stephon McIntyre and Luis “Lichito” Ruiz Lizarraga Jr. Now, “K-Smoove” will be looking for victory in his fight of 2016.

After winning the first nine fights of his professional career on the east coast, Brooklyn’s Zachary “Zungry” Ochoa took his show on the road in 2015 and he continued to show off the skills that have made him a top prospect as he picked up four wins, including a big victory in Puerto Rico and Los Angeles over Moises Rios, David Rodela and Alejandro “Soma” Rodriguez. Now the 23-year-old will look to continue the winning streak when he returns to the east coast for his first fight of 2016.

A professional since 2013, standout lightweight Damon Allen, has had victories over tough opposition in Hector Marengo, Tony “Sugar Boy” Walker and Travis “El Animal” Thompson. The 23-year-old Philadelphian stepped through the ropes twice in 2015, stopping Luis “Yeye” Rodriguez in three rounds at home in Philly before making his Los Angeles debut in November with a decision victory over Oscar Santana.

Returning to the ring for the first time since November of 2013, Philadelphia light heavyweight Todd Unthank-May is eager to pick up where he left off and build on his impressive unbeaten record. A versatile competitor who can do it all in the ring, the 27-year-old is coming off an impressive second-round technical knockout victory over Kentrell Clairborne in his most recent bout two years ago.
For more information, visit www.goldenboypromotions.com, www.warriorsboxing.com, www.toprank.com, www.hbo.com/boxing and www.eventsdc.com. Follow on Twitter at @GoldenBoyBoxing, @WarriorsBoxProm, @TopRank, @HBOBoxing, @KingKongBoxing, @Tiger_Thompson, @RealWorldKidAli, @Jessie_vargasJV and @dcsportsent become a fan on Facebook at www.facebook.com/GoldenBoyBoxing, www.facebook.com/WarriorsBoxingPromo, www.facebook.com/trboxing, www.facebook.com/HBOBoxing or www.facebook.com/OfficialEventsDC. Visit us on Instagram @GoldenBoyBoxing, @WarriorsBoxing, @trboxing, @KingKongBoxing, @EventsDC and follow the conversation by using #OrtizThompson.