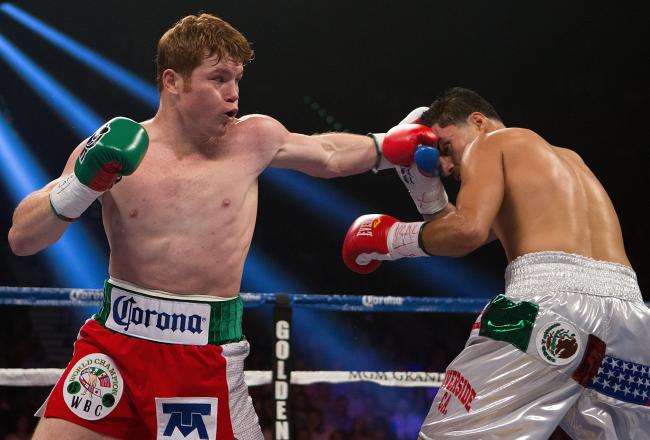 The landscape of boxing has just taken a monstrous shift. What could’ve been the biggest event in all of boxing, a fight between Manny Pacquiao and Floyd Mayweather Jr. is now just a sad afterthought. The detractors of boxing will suggest that the moment Juan Manuel Marquez knocked out Pacquiao he simultaneously dealt the death blow to a sport not afforded many superstars. However, that is just not true and boxing has always found a way to survive until its next mainstream cover boy comes along.

That could very well be junior middleweight Saul “Canelo” Alvarez. While many feel that Canelo is an untested fighter who has enjoyed a cushy journey into superstardom, others know his star power can’t be denied and feel his rise to the top of the sport is inevitable.

The star qualities of the Mexican born Alvarez are obvious; he possesses a unique look that differs from the prototypical Mexican fighter. Along with his unique good looks Alvarez has sharp boxing skills made to entertain. It would appear that the only thing missing is that transcending fight that propels a fighters’ career.

It should’ve been Miguel Cotto, but after Austin Trout ruined those plans, it seems that Canelo will have to come up with a way to satisfy the discontent certain fans have with his recent choice in opponents, while maintaining the commercial appeal from an opponent that can satisfy the casual fan’s interests.

We all know that Alvarez will take advantage of the Cinco de Mayo date — a typically big date in boxing — and fight an opponent that can add to the allure of Mexico’s most appealing fighter fighting on one of the country’s most extravagant dates. But who will Alvarez fight and which fight makes the most sense?

Whoever Canelo chooses to fight it should be seen as a viable fight that Canelo could lose. He needs to test himself against a live body, and a body that weighs a competitive amount. I can understand why Canelo and his handlers would tread lightly, after all Canelo has the potential for making boxing’s biggest paydays for years to come. However, he can’t lose perspective and he mustn’t forget what made Pacquiao into a boxing icon. Before Pacquiao was Pacquiao, he took on all comers and created moments in boxing that resonated with fans. He was known for creating action packed fights and taking on the kind of opponents that tested him. If Canelo hopes to find that kind of success then he needs to find his version of Juan Manuel Marquez and he won’t get that fighting the kind of opposition we’ve come to expect from him.