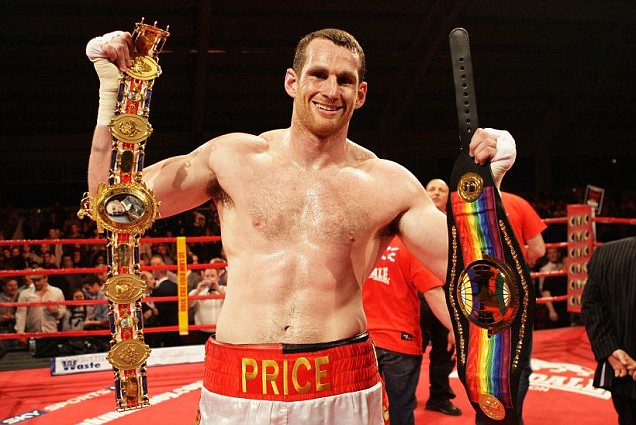 In what will be the first defence of his British heavyweight title, Liverool’s David Price [13-0 – 11 KOs] meets Audley “A Force” Harrison [28-5 – 21 KOs] in his biggest test to date on October 13th. Even at 40 years old, Harrison, a one-time world prospect earlier in his own career, has more to offer Price than a mere stepping stone towards the acquisition of a Lonsdale belt. For the first time in his professional career, Price will have a disadvantage in reach, despite being 3 inches taller than his opponent at 6’8″. He will also face a southpaw stance, something which didn’t seem to cause him any issues against Pavol Polakovic [13-8], a blown-up cruiserweight with just one knockout to his name, but this is a very different proposition. Harrison, in contrast, is a full blown “super-heavyweight”, a fellow Olympic medalist, and possesses a stern left cross which can provide a prompt answer to the chin question which follows every prospect until they are eventually tagged.

The last time Price met a southpaw who could bang, he was stopped by Italy’s Roberto Cammarelle at the Beijing Olympic Games of 2008. Indeed, if he were naive enough to box squarely and offer the same angles for a left cross, the same fate could become of Price against Harrison. Based on his development as a prospect since turning professional, however, it’s likely that Price will adopt much more suitable approach for a southpaw opponent this time around. Price’s lateral movement and ability to control range have improved considerably since turning professional. With this in mind, Price should be capable of getting to where Harrison, as a southpaw, doesn’t want him to be, and that’s outside Harrison’s right hand lead where he will have the angles to throw left hooks on the blind side.

With both boxers being wary of each other’s powerful cross, it’s likely that the bout will be a tentative one in the early stages with Price probing patiently and Harrison content to sit back. Despite the fact that Price has been working behind what is becoming a potent jab, a weapon used to full effect in his most complete performance to date against Sam Sexton, it’s difficult to jab against a southpaw, especially one with longer reach. Price will have more success landing the cross, and it will be interesting to see if he will be more comfortable starting attacks with the right hand against a southpaw than when he was in the amateurs. If he is able to offset Harrison with the cross, Price will have the opportunity to show his willingness to work on the inside. Despite taller boxers typically not liking it up close and personal, Price’s inside work since turning professional has been impressive. He has looked capable of landing hooks and uppercuts from tight angles, and Harrison would do well to be wary of this when contesting the battle for outside foot placement.

Harrison’s tactical awareness and experience could be a telling factor if he can manage to lure Price into untested waters, with the British & Commonwealth heavyweight champion having only ever gone 7 rounds on one occasion, and it was a fairly slow-paced fight with Raman Sukhaterin [6-15]. Just how much Harrison has left with regards to being up to the task of a potential 12 rounder is difficult to gauge, but one would hope he’s suitably prepared for a long night. After all, following his abysmal performance in losing to David Haye [24-1] inside three rounds, Harrison has long since targetted Price, as well as Tyson Fury in a quest to redeem himself. Using the lure of a window of opportunity which would allow either of Britain’s top heavyweight prospects an appeal to a much wider audience, Harrison now gets his wish, and ought not to be underestimated as he ventures into last chance saloon. In his last outing against Ali Adams [13-3-1], where he claimed the lightly regarded International Masters title, Harrison shook off 18 months of ring rust and was beginning to look the more lively of the two before walking Adams into a big land in the 4th, forcing a stoppage soon after. Harrison was brought in with the hopes of furthering the career of Adams, but he clearly had other ideas and the “upset” has allowed him the opportunity to show how much he has got left on a bigger stage.

At 29 years of age, Price doesn’t have quite as much time on his side as other prospects, but beating Harrison would represent excellent progress as far as getting a name on his record goes. In the process though, he will ideally want to demonstrate that he is ready to step up from domestic level as soon as he wins a Lonsdale belt outright. Price will start the fight as favourite, but may yet be forced to answer the chin and/or stamina question(s) by the end of the night. If he respects Harrison’s power, picks his shots and shows the necessary discipline to break him down, he should be able to force a stoppage within the mid-rounds. A dominant display against Harrison would issue a statement of intent that he ought to be taken seriously as a world prospect, but might this be too much to ask of a 13 fight novice, even one as talented and heavy handed as Price? We shall find out in October in this crossroads meeting which is by no means a formality.