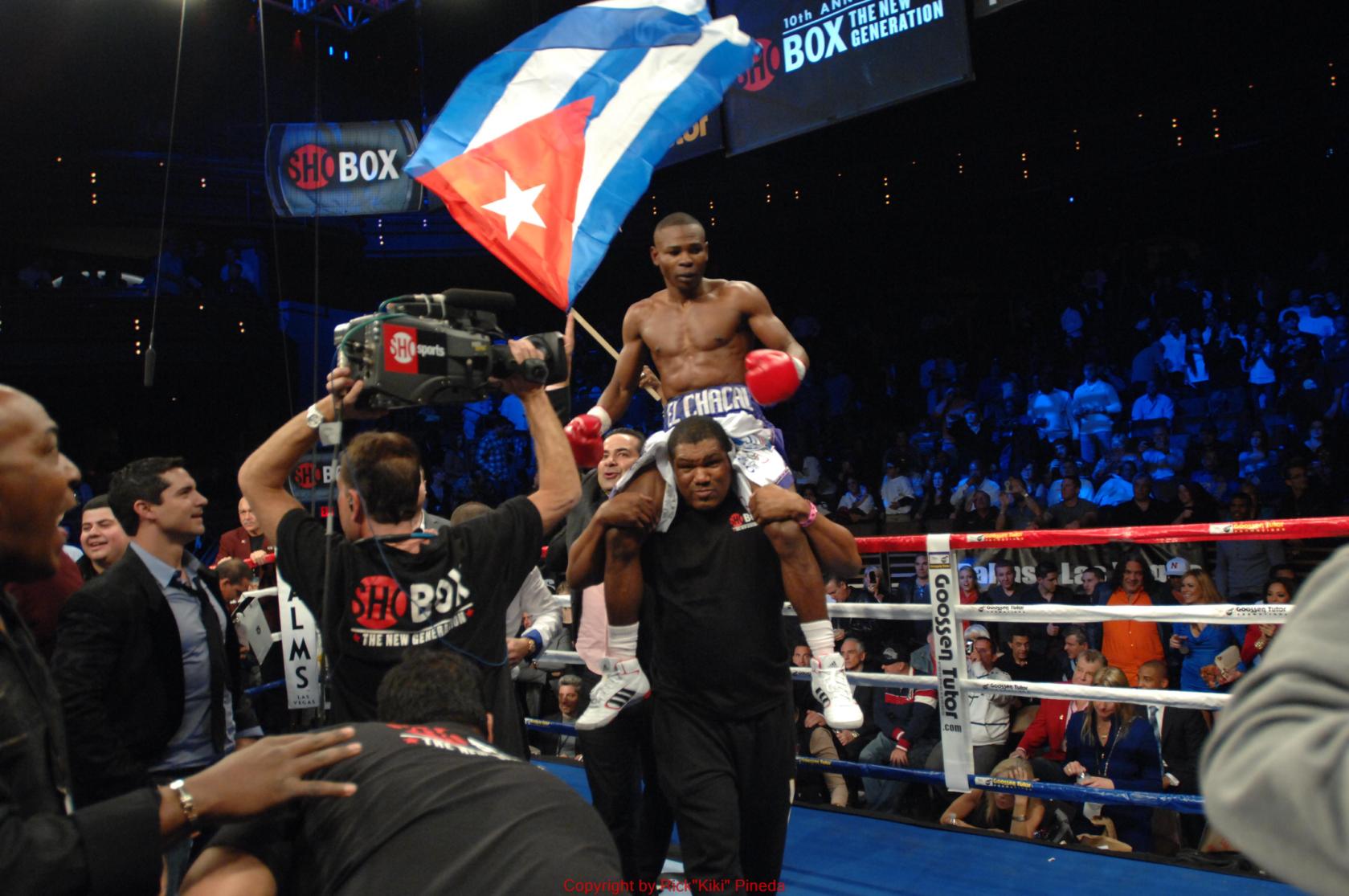 The fight between Guillermo Rigondeaux and Roberto Marroquin on the Chavez-Martinez Pay-Per-View is apparently in jeopardy and close to being out. A Circuit Court hearing was earlier this week in Miami, and the Court enjoined World Boxing Association World Super Bantamweight Champion Guillermo “El Chacal” Rigondeaux (10-0, 8 KOs) from engaging in any bout not approved by his manager, Gary Hyde, and also enjoined Rigondeaux from participating in a September 15 fight previously announced by Top Rank.

The Rigondeaux-Top Rank contract expired prior to that date and Mr. Hyde had not approved the September 15 date and had, in fact, obtained lucrative offers from other promoters, mainly Golden Boy. At that point Top Rank sought to schedule Mr. Rigondeaux without Mr. Hyde’s permission.

However, now the Miami-based attorney of WBA junior featherweight belt holder and two-time Olympic gold medalist Guillermo Rigondeaux has filed an “emergency” motion on the fighter’s behalf which seeks to allow him to defend his belt against Robert Marroquin on the undercard of an HBO Pay Per View-televised main between Julio Cesar Chavez Jr. and Sergio Martinez on Sept. 15 at the Thomas and Mack Center in Las Vegas.

It would be a great opportunity for Rigondeaux to once again display his magnificent talents on a high profile pay-per-view as his last bout to place on the Manny Pacquiao-Tim Bradley pay-per-view where he knocked down Teon Kennedy five times en route to a TKO victory. With the ball in his division rolling and the top fights being made at super-bantamweight, it seems like Rigondeaux might have to sit and wait with his title for the litigation process to take course.

The upcoming schedule pits 4 of the bigger names in his division taking on each other with Donaire-Nishioka fighting on October 13th and Mares-Moreno most likely taking place sometime in November. Rigondeaux has been a guest on ThaBoxingVoice.com’s radio show and has mentioned his desire to fight the top names, specifically Nonito Donaire and Abner Mares. An impressive performance on September 15th might have led to one of those big fights, specifically Donaire who is signed to Top Rank. Bob Arum, the head of Top Rank had mentioned to ThaBoxingVoice.com that he was eyeing a possible Donaire-Rigondeaux fight for early 2013. So now those plans might be in jeopardy as well.

But Team Rigondeaux is not giving up. “The original hearing was on our motion to strike [Hyde’s contract,] so now we have a motion for a rehearing that is pending,” said Guy Spiegelman, Rigondeaux’s attorney. “It’s a procedural thing. The court will probably consider it. I don’t know if the court will reverse itself, but this thing is far from over.”

Spiegelman said Hyde had agreed to share in a five-bout promotional agreement with Top Rank, which is handling the Chavez-Martinez card. Spiegelman argues that Rigondeaux-Marroquin is the final bout of the five-fight pact, and that Hyde is trying to extend his contract as a result.

“[Hyde] is trying to force Rigondeaux to take other promotional deals so as to extend his contract with him as a manager. I just want to determine [Rigondeaux’s rights,]” said Spiegelman.

But Miller has denied Rigondeaux’s motion to strike Hyde’s contract, and enforced Hyde’s request for a two-year injunction against Rigondeaux “prohibiting him from working in the boxing industry except under the management of Gary Hyde.”

“This is the last fight for Rigondeaux that Top Rank is doing to fulfill its contractual obligations. The thing that is baffling to me is that Hyde’s going to get paid, so it’s not like he’s going to get cheated,” said Spiegelman. “So I don’t understand where the irreparable injury is, which is standard for an injunction. Why does he not want the fight to go forward?”

Most boxing fans would wonder why he wouldn’t want the fight to go forward if it would create another opportunity for bigger exposure for the talented Cuban who many see as a threat to the big names in the division. Especially, when the main reason for the big names turning down the fight is the high risk low reward title when it comes to fighting a Guillermo Rigondeaux.

English said that Hyde’s automatic two-year contract extension went into effect when  Rigondeaux dethroned Rico Ramos for his current crown in January. But Spiegelman said he believes the terms of the Rigondeaux’s two-year agreement began in November of 2010, when Rigondeaux won the WBA’s interim belt by split-decision over Ricardo Cordoba.”We feel as if [Rigondeaux’s] contract should be terminated this November, because he had an additional two years from when he obtained the championship, which he did in November of 2010,” said Spiegelman.

“That being said, we feel that it should expire in November. In fact, the judge, at the hearing, kind of corrected himself and said that there was a factor to be resolved as to when the two years actually ends. He commented that I was correct.”

Top Rank lawyer David Marroso, who is a senior attorney with the Los Angeles-based O’Melveny and Myers law firm, said he is awaiting what transpires with Rigondeaux’s most recent move.

“We understand Guillermo’s attorney filed an emergency motion with the court that contains new information the court was not aware of,” said Marroso. “We are waiting to see what the court does before making any decisions.”

The world of boxing is also waiting as it appears Rigondeaux will have another setback as he tries to cash in on whatever fighting prime he has left. Rigondeaux came to the United States from Cuba hoping to have a chance to live out the American Dream and to many observes is one of the greatest amateur boxers of all time. One must wonder, had things been different and had he turned pro earlier what kind of dent he would have put on the world of pro boxing.

With the schedules filling up for the rest of this year and the best fighters in his division already fighting each other, it seems that we may not see Rigondeaux until early next year. Rigondeaux only has 10 pro fights but will turn 32 years old this year. One can only hope, he doesn’t suffer the same layoff his Cuban counterpart Yuriorkis Gamboa has gone through this year during his litigation process. Cuban defectors unfortunately have to use foreign promoters when trying to defect from Cuba and by the time they get to the United States to land major fights, a co-promotion is usually involved. That’s where the problem lies as they try and sway away from the foreign promoter.

As early as this week, the feeling out of Team Rigondeaux is a positive one in regards to landing the spot on the Chavez-Martinez bill. That feeling is still there but surely there will be more news to come regarding this matter.