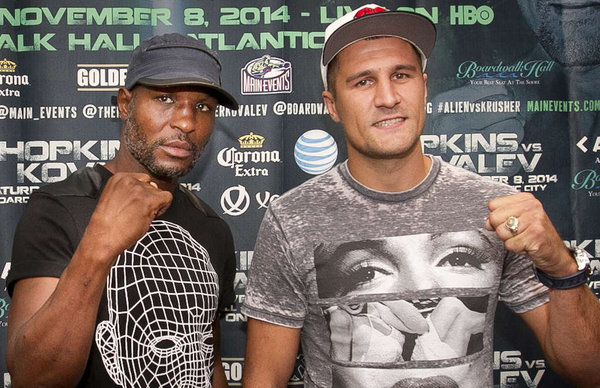 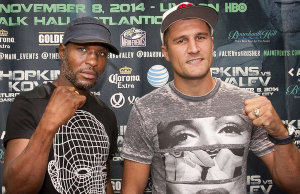 2014 may not have been a great year for boxing but November certainly has the potential to be one of its best months.  Steve Waters takes a look at some of the bigger fights and makes his picks.

TV – HBO
Venue – Boardwalk Hall, Atlantic City, New Jersey
One of the most eagerly awaited fights of the year is finally upon us as 49-year-old Bernard “The Alien” Hopkins (55-6-2, 32KOs) takes on Sergey “Krusher” Kovalev (25-0, 23KOs).  Whilst the fight certainly is intriguing and has provided us with perhaps the best (albeit 1 episode) 24/7 in years, I struggle to get too excited about watching B-Hop, who has recently described his style as “art at work” but I can’t second that.  However he is extremely smart at neutralising his opponents strengths, and against Kovalev, he will have to use every dirty, spoiler trick in his arsenal to get the job done. Does he get a pass for using these tactics to continue to be successful at 49 years of age?, sure and despite this writer not being a big fan of Hopkins fighting style, I have so much respect for him as an athlete.  The way he looks after his body is truly inspirational.  With that being said, a Kovalev win is better for boxing, The Russian might not have the best defense in the World but with his devastating power, he certainly excites and at 31, seemingly has a great future in the sport.  Having never gone a full 12 rounds you’d expect the game plan for Kovalev would be – not to let “The Alien” settle and attempt to get him out of there early, but that might be easier said than done, Hopkins has never been stopped and has gone the full distance (except for his NC with Chad Dawson) in every-one of his fights since stopping Oscar De La Hoya over a decade ago.
Pick – I can’t believe I am doing this, I really hope I am wrong but I am picking Bernard Hopkins to make it an ugly fight and win on points.
November 15
Wladimir Klitschko vs. Kubrat Pulev

This fight was originally expected to take place in August but a torn left biceps caused Wladimir Klitchko (62-3,52KOs) to postpone the original date.  People are quick to blame the Klitschko brothers reign of dominance and low-risk style fighting for the monster decline in the heavyweight divisions popularity but we all know if they were American it would be a very different story.  With Vitali retired and Wladimir, who has dominated the division since 2005, now in the latter stages of his career, we should perhaps take time to appreciate just how good they have been, after all, we can’t blame them for the lack of contenders and competition since the retirement of Lennox Lewis, I really feel their size and power would’ve caused difficulties in any era. Wladimir’s opponent is undefeated Bulgarian Kubrat Pulev (20-0,11KOs), who is a credible opponent but surely his best chance of winning will be if the Ukrainian’s injury isn’t completely healed.
Pick – As usual, Klitschko to dominate with the jab for the first few rounds before deciding his opponent has nothing left and forcing a stoppage in the mid-to-late rounds
November 22
Manny Pacquiao vs. Chris Algieri

TV – HBO PPV ($65)
Venue – Cotai Arena, Venetian Resort, Macao, China
Manny Pacquiao (56-5-2, 38KOs) will be looking to win a third straight fight since being knocked out cold by Juan Manuel Marquez nearly two years ago. His opponent Chris Algieri (20-0, 8KOs) was relatively unheard of until upsetting Ruslan Provodnikov in a closely contested fight back in June, in that bout he was down twice in the first round and very nearly stopped.  I’ve been amazed at the amount of people picking Algieri to pull off an upset, he isn’t a bad boxer and has a sizeable height and reach advantage over “Pacman” but with only eight stoppages to his name, there is little to suggest he has the power to keep Pac off him for 12 rounds, especially when you consider, as with most Manny fights, this is taking place at a catch-weight (144lbs) which favors him much more than his opponent.
Pick – obviously I am going with Manny to win on points, maybe even via a late stoppage which would be his first since stopping Miguel Cotto 5 years ago.
November 22
Nathan Cleverly vs. Tony Bellew
TV – UK Sky Box Office
Venue – Echo Arena, Liverpool, UK
UK fight fans are extremely unhappy that Eddie Hearn has made this heavily publicised rematch between Welshman Nathan Cleverly (28-1, 14KOs) and Liverpudlian Tony Bellew (22-2-1, 14KOs) a PPV event.  He has tried to make it more marketable by adding two of Britain’s best known Super Middleweights James DeGale and George Groves on the card (both in mismatches), no doubt hoping to set up another PPV rematch.  As far as the Cleverly/Bellew bout, I think it’ll be very different from their first fight when Cleverly won via a majority decision, since then, they have both been in with World level fighters, both losing badly, Cleverly against Kovalev (TKO 4) and Bellew against Adonis Stevenson (TKO 6).  Their previous fight took place at Light-heavyweight and this one is happening at Cruiserweight where I feel Bellew is the most comfortable.
Pick – Bellew to get his revenge, winning via knockout, potentially setting up a rubbermatch.
November 29
Terence Crawford vs. Raymundo Beltran
TV – HBO
Venue – CenturyLink Center, Omaha, Nebraska
Mexican Raymundo Beltran (29-6-1, 17KOs) travels to the home town of undefeated Terence Crawford (24-0, 17KOs) to fight for the WBO Lightweight title that Crawford won from Scotlands Ricky Burns. Ironically, it is a belt that Beltran should already own, after being robbed of a victory against Burns himself (SD Draw) last year, however, 24-year-old Crawford looks like the real deal and in his last fight against Yuriorkis Gamboa, where he won via a 9th round TKO, proved he belongs at World level.
Pick – I think Crawford wins by knockout
November 29
Tyson Fury vs. Dereck Chisora
Co-feature Billy Joe Saunders vs. Chris Eubank Jr.
TV – Boxnation (UK)
Venue – ExCel Arena, Dockland, London, UK
Another rematch in the UK, this time promoted by Frank Warren, an event titled “Bad Blood”, which certainly has the Bellew/Cleverly night beaten. Not only are fans treated to Tyson Fury (22-0, 16KOs) vs. Dereck Chisora (20-4, 13KOs), they also get to see what has the potential to be Britain’s fight of the year between undefeated Middleweights Billy Joe Saunders (20-0, 11KOs) and Chris Eubank Jr. (18-0, 13KOs).  I’m not usually one to get excited too early about undefeated Brits but I really want to believe the hype when it comes to Chris Eubank Jr. I’d love for him to be as good as his early potential has shown, we will find out because traveller Billie Joe Saunders has at least proved himself as a top domestic level fighter, this is a serious step up for Chris Eubank and I really believe the “Bad Blood” between these two is real and it could steal the show from the main event which is the re-scheduled heavyweight clash between Fury and Chisora, both fighters are much improved from when they fought in 2011, which was a fight Fury won on points. They know that a win will be the difference between future World title shots and domestic level fights. Chisora has the much better experience having fought (unsuccessfully) at World level against Vitali Klitcschko (L UD 12) and David Haye (L TKO 5).  The biggest name Fury has fought in recent years is Steve Cunningham (W 7 KO) but he was unfortunate not to get a fight with Haye and despite having horrible co-ordination and footwork, at 6ft 9″ has the potential to knockout anyone in the division and therefore has perhaps somewhat been avoided by the bigger names.
Picks I’m going with Tyson Fury to win again, this time via stoppage, hopefully setting up future fights with Wladimir Klitschko and/or the winner of Stiverne/Wilder and I’m also picking Chris Eubank Jr. to win via knockout.
Last months picks 4-2
Tweet