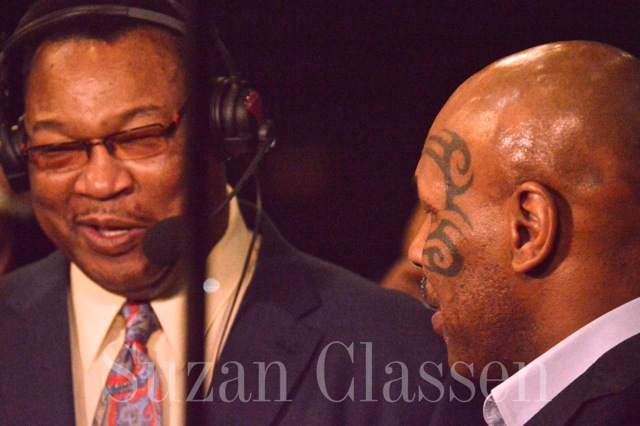 Decided to go to the Sands Convention center last evening for a night of boxing with the newly founded Iron Mike Productions and the Legends of Boxing series. Since this was going to be the first boxing event at the Sand’s for Iron Mike I was looking forward to meeting some of the new fighters he had signed recently. Mike set up an meet and greet before the fight where he took photos with the fans and discussed his plans in boxing. Tyson was ringside through most of the fight to support his new stable of fighters. The crowd made it difficult at times for Mike to walk around because everyone wanted to take a picture with him. It was really great to see him supporting his fighters because after talking with them they really look up to him. One surprise of the evening was that Gerry Cooney and Larry Homes were doing the commentating and it was live on Universal Streaming,

The first bout of the evening was Farid Aghayev of Baku Azerbaijan 1-0 vs Lanny Dardar out of  Grand Bois, Louisiana also 1-0 was a very good match up. Both fighters gave a truly good fight and was a great start to the evening of boxing, The fight decision was called a draw. I had Dardar up by one round. But it was a justified draw and I understand not wanting to ruin either fighters perfect record. Dardar is a very tough opponent and Aghayev had some great moments pressuring Dardar with his jab using the reach advantage every change he got. Dardar figured out Aghayev was keeping his distance and got inside which made it more of a fight. Two tough fighters and we could not have asked for a better four rounder.

The next fight was Erickson Lubin 3-0 from Orlando Florida vs. Tirobio Ball 4-2 of Meridan Mississippi was another great match. The fight was an instant exchange of blows between both fighters…but Ball could not be a match for the quick and lightning hands of Lubin. Lubin is a fighter that should stay on everyone’s radar…and showed everyone that his speed and accuracy is the  perfect combination. Getting a TKO in the 3rd round was not a surprise by anyone and he definitely was a crowd favorite. Very good move on Tyson’s team for signing him. We will be watching this fighter climb to the top.  Not taking anything away from Ball he is a very tough fighter. Just could not handle the speed and accuracy of Lubin’s punching.

Next into the ring was Claudio Marrero 15-1 from Santo Domingo, Dominican Republic vs Jose Angel Beranza 36-29-2  of Mexico City, Mexico started off slow and picked up in the middle rounds with Marrero  going to the body of Beranza. This eight rounder could have ended in those rounds if Marrero would have put more pressure on Beranza but it did not happen. Crowd was yelling at Marrero to  eel the pressure on and go in but he played it very conservative and that may be due  to the experience he felt Beranza had. This was an eight round fight and it went all eight rounds and ended with a UD for Marrero. Would have like to see more from Marrero and hope his next fight he gives us more.

Next bout was Alexei Collado  18-0 of Havanna Cuba vs Edgar Riovalle 36-17-2 of Mexico City Mexico. Another really good match and two tough fighters. Collado won by UD. I have to give credit where it is due and Riovalle was one tough fighter who landed several really great shots and I thought maybe at times he was controlling the fight. Both fighters showboated and danced around the ring joking with the other fighter and egging him on. Referee Steve Smoger was even getting upset and reprimanded Collado for playing games. There were lots of exchanges which made for a very entertaining fight. The crowd was pleased

Next fight was Samuel Vasquez 13-0 from Monessen, Pennsyvania vs Berlin Abreu 7-0 of Santo Domingo,  Dominican Repulic. The fight did not start right away there was some controversy regarding the knee brace that Abreu had on. After a few discussions with the ring doctor and the inspector they allowed Abreu to fight with it on. As the fight started out I made up my mind quickly that Abreu was a very good fighter but could see him struggle with his movement due to that leg brace. Vasquez tried to come in and push Abreu around and in the second round Abreu dropped Vasquez. Quickly after the knock down the fight changed.  The pressure was on and the fight turned around. Vasquez became the aggressor but Abreu held in there for two more rounds until the referee stopped the fight which gave Abreu his first loss. The crowd thought the stoppage was premature but honestly after looking at my photos, Abreu was hurt and better to be safe than sorry. I like Abreu and hope to see more of him

The co main event which had a belt on the line from Umberto Savigne 12-1 from Miami Florida via Cuba vs. Maxell Taylor 18-6-1 of Baltimore Maryland. Savigne was in top shape but as Taylor came into the ring you could see that with him being so out of shape the conditioning and the power of Savigne would over power him quickly. Just as the fight started it ended….with a KO in the beginning of the second round. Taylor was down and out cold it took several minutes and the help of his team and the ring doctor to get Taylor up and out of the ring. Crowd cheered Savigne on and Mike Tyson came into the ring to congratulate the winner and thank the crowd for coming to his fight. He announced his news of the contract and that he would be back monthly to the Sand’s Event Center to give us boxing.

The main event Juan Carlos Payano 14-0  from Santiago Dominican Republic vs German Meraz 46-29-1 of Sonaro Mexico After two very exciting fights it was hard to adjust to the steady but slow pace of this bout. The crowd as well was having a hard time appreciating the the steady but slow pace. Meraz was running around the ring through out the whole fight sticking and moving while Payano was getting truly frustrated which you could feel growing round by round. Payano landed many more punches but Maraz caught Payano a few times causing a small cut under his eye which swelled a little. Throughout this fight Payano was landing but Meraz was just eating each blow and moving on…as the frustration grew with Payano it did with the crowd. The judges scored the fight a UD for Payano. Not surprising….hard to win a fight when your running more than you are fighting.

I had the pleasure of meeting Dennis Garlaza of Orlando  Florida during the night.  Unfortunately Galarza’s opponent pulled out of the fight at the weigh in so he did not get to fight but a great sportsman and looking forward to seeing him fight. We discussed his career and his plans to be a future champion. He just turned pro recently and already he has the best outlook a fighter can have. He appreciates being signed by Iron Mike and looking for to a successful 2014 of boxing. Keep an eye out for him.