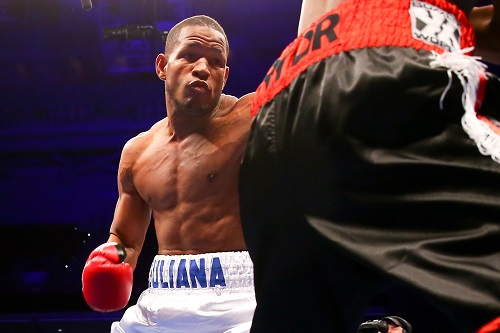 Barrera, 32, made his professional debut in 2009 and knocked out his first five opponents in the first or second round. Since then he has had continued success securing both the WBO Latino and WBA Fedelatin Light Heavyweight Titles. Most recently, he knocked out Lee Campbell in the sixth round at Mohegan Sun at Pocono Downs on Jun. 21, 2014. This will be his third fight in 2014 (in addition to the knockout of Campbell he defeated Larry Pryor via unanimous decision on Apr. 4, 2014 at the Liacouras Center in Philadelphia, PA). This will be the first eight-round fight of his professional career and his first in Connecticut (the majority of his professional fights have taken place in his new home state of Florida). Barrera said, “I’m looking forward to Sep. 20. I’ve been in Big Bear training really hard and I’m ready to give the fans another great show. Training with my new trainer, Abel Sanchez, in Big Bear has been a great move for my career. I feel strong, I’m in excellent shape and everyday I continue to sharpen my skills. I’m excited for what’s to come in my career working with Abel.” Sullivan’s co-manager, Luis Molina, added, “We are excited to be back in action again and we are looking forward to another ‘W.’ Sullivan is in great shape. With his new trainer, Abel Sanchez, he has been able to master some things.”

Sullivan now trains at Sanchez’s facility in Big Bear, CA alongside GGG and other top notch fighters. According to Sanchez he and Barrera took some time to adjust to one another but now he has been able to incorporate changes to Sullivan’s routine, “It has taken us awhile to blend together but he is very open-minded and a very diligent worker so we are having fun trying new things out. We are getting him in a different kind of shape because Big Bear tends to do that. Sullivan training around Golovkin and some of the other champions that we have here has been very beneficial because it has helped him understand what it takes to get to that level. We are looking forward to him trying some of these new things out on Sep. 20.”

Peter McGinley, Watkins’ trainer/manager had this to say about the fight with Barrera, “We are very excited to have this opportunity to compete against an undefeated fighter of this caliber. We hope he trains for this fight harder than he’s ever trained before. If he doesn’t he will truly regret it.” Watkins added only, “Want some, get some!”

According to Main Events’ matchmaker Jolene Mizzone, Barrera wants to take his career to the next level. She said, “Barrera has been asking us to step up the competition and because he made the move across country to Big Bear away from his friends and family for a new trainer has proven to us he is serious about taking his career to the next level.” She added, “The key to a good boxer-trainer relationship is clicking. Abel and Sullivan appear to be clicking well so far.”