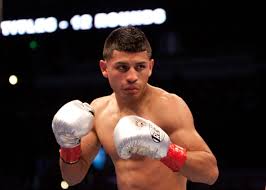 Abner Mares (28-1, 15 KOs) reunited with his longtime former trainer Clemente Medina to help continue his forward momentum in his career after losing to Jhonny Gonzalez. It seems that the partnership with Medina is working for the former three time world champion, as he dominated the very game Jose Ramirez (25-5, 15 KOs).

In the opening round Ramirez tried to pressure Mares and an inside brawl erupted. Mares was getting the better of the exchanges as he continuously beat Ramirez to the punch by throwing the shorter hooks. Mares ended up scoring a first round knockdown off a body shot, but it was partly due to Ramirez being off balance. The tenure of the fight remained the same for the rest of the fight.

In the 3rd round Mares scored another knockdown by swarming Ramirez on the ropes, but Ramirez immediately came right back and tried to force the action but was constantly being outpointed. In the very next round Mares landed a good body shot and Ramirez’s knee touched the canvas but Ramirez simultaneously threw a left hook, which prevented the referee from giving him a 10 count.

Ramirez continued to fight every round of the fight and landed his fair number of punches, but appeared to weaken slightly as the rounds went by. Then in the 5th round Mares threw a jab right left hook combination that sent Ramirez to the canvas. Ramirez managed to barely beat the 10 count and as usual came right back to Mares by throwing his own combinations, but in the closing seconds seemed to be on unsteady legs. Ramirez gave a courageous performance, but his corner did the right thing by stopping the fight.

Given Mares’ great talent, forward momentum, and popularity, he will certainly be in the line for a major fight in the immediate future. Possible opponents for Mares are Vasyl Lomachenko, Gary Russell Jr., Johnny Gonzalez, Evgeny Gradovich, Nicholas Walters or even Leo Santa Cruz.