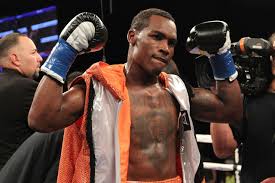 Jermall Charlo improves his undefeated record to 20 wins and 16 knockouts by outclassing the overmatched opponent Lenny Bottai (22-2, 9 KOs). The difference in class was evident from the opening round. Charlo established his jab very well to maintain distance, and used it to set up combinations from the outside. Even though Bottai was overmatched, he continued to fight back by lunging in with left hooks, but Charlo managed to block the majority of Bottai’s punches.

In the opening seconds of the third round Charlo landed a sharp left hook to the temple which sent Bottai to the canvas. Botta tried to beat the count but he was on unsteady legs and the referee stepped in and stopped the fight. Charlo scored a 3rd round knockout victory.

During the post fight interview Charlo explained, “Bottai wanted to get rough. Ronnie Shields told me he’s going to be right there for me and I shot the left hook, and he at it.” He also expressed interest in fighting the current IBF titleholder Cornelius Bundrage. Charlo stated, “K9 I want you. I want that IBF now.”