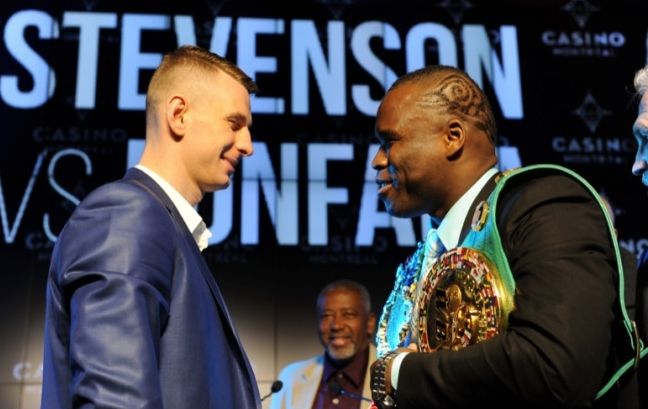 On May 24th, Montreal’s Bell Centre will again host a stellar night of boxing. The fight city’s lineal light heavyweight champion, Adonis “Superman” Stevenson and Andrzej Fonfara, a skilled contender, are set to headline a stacked card this weekend. Stevenson promises to continue his knockout streak against Fonfara, but the challenger has some notable scraps under his belt as well.

In some ways, this match-up is overshadowed by other, bigger fights that loom for Stevenson in the distance. A potential unification fight against fellow champion, and newly confessed “Alien,” Bernard Hopkins could follow provided Stevenson gets the win on Saturday. After changing promoters, Stevenson has made it unlikely that he will soon be stepping into the ring with the dangerous Russian puncher Sergey Kovalev. While some fans may be disappointed at Stevenson’s decision to step into the ring with anyone but the very best, Fonfara is a game opponent.

Fonfara is a coming off a three fight knockout streak himself and could prove dangerous. Though he has yet to face opposition of Stevenson’s level, he has at least a puncher’s chance to pull off the upset. Perhaps we could see a pugnacious Fonfara prove his chin against an over-confident Stevenson and then overcome him in a slug fest as he did against Campillo. Stevenson so far has responded well to being the A-side and the fan favorite, but a gutsy challenger like Fonfara has a chance to make history.

Conventional wisdom says that Stevenson patiently waits him out before knocking Fonfara down Queer Street, but fight fans know that this is an interesting headliner to cap off a great evening of fights from Montreal.