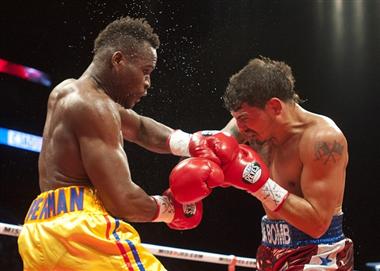 Last Friday night at Montreal’s Bell center, saw a thrilling action filled fight between Haitian/Canadian, Adonis “superman “Stevenson (w19 ko 16 L 1), and Illinois based Donovan “da bomb” George, ( w23 ko 20 L3) was a contest that was as entertaining as any one side fight could be. The fight was an eliminator for a shot at Carl Foch’s IBF Super middleweight title, rumored to be taking place sometime in spring of 2013.

The action began with Stevenson, in a southpaw stance, the visibly bigger looking fighter, dominating the action asserting himself with heavy right jabs, and weighty one two combos, whilst circling his prey, George steadfastly holding center ring. Towards the end of the first, George, unleashed a wicked right hook, connecting beautifully, followed by a couple of vicious  combinations, as the bell sounded, as if to remind Stevenson a long nights work lay ahead.

Rounds two and three saw some fast to and from action. George claiming center ring again , whilst Stevenson continued to fire off heavy jabs and power shots, George soaking them up, picking his moments and retaliating effectively, pushing Stevenson back, with short stinging hooks to head and body. I gave round two to Stevenson, for sheer work rate alone, round three was harder to call, as George stepped up his game and answered pretty much every punch  taken with good clean work of his own, for me just nicking the third, on quality and aggression.

Round four sees George come out like a man possessed, stalking Stevenson, forcing him onto the back foot, and connecting with some heavy shots as the pace heats up. Stevenson’s sublime footwork, however, allows him to escape the assault, and fire back with his own solid artillery, a great toe to toe exchange exploding as the round ends.

Round five, sees another change in the flow, Stevenson the aggressor, from the bell pounding George, with accurate shots to head and body. Stevenson with a solid body shot mid-way through the round sends George down onto one knee, the pain visible on his face, as he rises at the count of eight. Survival is that on George’s entire mind as Stevenson is on him again sending him down again, with 30 seconds of the round remaining. George shows amazing courage and battles back wildly, catching Stevenson with a flurry of shots driving him against the ropes as the round ends.

Round six sees George change into survival mode, getting trapped against the ropes and in the corner, covering up, but taking some ruthless punishment particularly to the body, with some hard uppercuts smashing his head back, sending him down briefly again. Stevenson’s round by far, but credit must go to George, for his resilience, and will to survive.

Round seven brings a change in fortune for George, as he regroups, boxing from the center again and having some success. Stevenson looking a little tired, and probably frustrated at George’s durability. Rounds eight and nine continue in a similar fashion both men having success. Stevenson’s work rate is slowing, some quality work from both men, making for an equal couple of rounds, probably giving them one a piece.

Rounds ten and eleven see George stalking Stevenson again, looking to close him down and trap him against the ropes or in a corner. Although obviously tired, Stevenson manages to keep George at a distance with his right hand at the end of round eleven. Stevenson connects with an awesome left hook to George’s head, which shakes him down to his boots, and obviously hurts him, as he returns to the corner looking tired and dejected.

Stevenson obviously smells blood, as round twelve begins the crowd is standing, and Stevenson cocks his right hand high above his head menacingly. Donovan George launches an all-out, all or nothing assault but is thwarted in his attempt as Stevenson drives him back and down, at 2.28 of the round. George a true warrior is up at eight, only to be overwhelmed and sent down again to be counted out at 2.45.

Unfortunately the future looks a little shaky for Donavon George, this being his third loss. For Stevenson a fight with Carl Froch beckons but he will have to wait in line, as Froch fights Yusef Mack next, followed by a possible rematch with Lucian Bute.

Both men showed respect for each other after the fight Stevenson calling George a “warrior”, and both men sustained injuries after Fridays fight, Stevenson a broken left hand and George several broken ribs. All in all a very entertaining back and forth fight from two warriors.