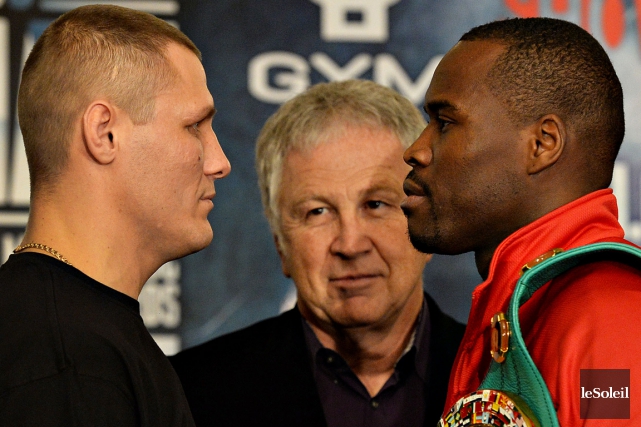 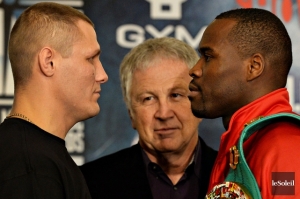 Adonis Stevenson (24-1, 20 KOs) has been overshadowed by his main adversary Sergey Kovalev after he defeated Bernard Hopkins in one of the most viewed boxing events of the year. Many people are now leaning towards Kovalev in declaring him the best fighter in the division, and surely Stevenson will want to make a statement in his hometown to make people think otherwise. His opponent Dmitry Sukhotsky (22-2, 16 KOs), will come in as the underdog, in high hopes to pull off the major upset and catapult his career to new plateaus.

Adonis Stevenson and Dmitry Sukhotsky are identical in height. Both stand at 5’11, with Stevenson having a 77 inch arm reach, and Sukhotsky’s arm length currently being unlisted. Regardless of Sukhotsky’s reach, Stevenson’s athletic ability will be the biggest factor of the fight. Stevenson is by far the more agile fighter between the two, which will assist Stevenson in avoiding punches, and setting up his offense.

As his record indicates, Stevenson is a very strong puncher. He definitely has the capacity of scoring multiple knockdowns, if not a knockout against Sukhotsky.

Sukhotsky has enough power to keep an opponent from just barging in. He may be able to hurt Stevenson during the fight, but scoring a knockdown or a knockout seems improbable.

Stevenson is the faster fighter in regards to footwork and hand speed. His quickness should enable to him to beat Sukhotsky to the punch during exchanges, counter more effectively, and avoid incoming fire.

Sukhotsky is not a slow fighter by any means, but will be at a disadvantage in the speed category. This means he will have to try and negate Stevenson’s physical abilities with timing and boxing skills, which is something he doesn’t necessarily excel at.

Stevenson is an underrated defensive fighter. It’s evident he understands how to utilize the fundamental principles of being a good defensive fighter, by using distance as defense, meaning he doesn’t remain stationary when punches are thrown at his direction. He knows how to use effective footwork to avoid fire. Stevenson’s power, and countering abilities also limits his opponent’s offensive, thus giving Stevenson an easier time from a defensive standpoint.

Sukhotsky displays good defensive ability in spurts, but also has many defensive lapses throughout the fight. At times he shows decent upper body movement and good subtle footwork, but he also has moments of remaining stationary and leaving himself open for countering opportunities at mid range.

Sukhotsky also has a bad tendency of remaining flat-footed and leaning back at the same time thinking this will defend against a solid fighter’s offensive work, when in reality it just leaves him susceptible to body punching and lengthy combinations. Sukhotsky’s defensive miscues might be very costly against a hard hitting puncher such as Stevenson.

Stevenson is a very good offensive fighter. He establishes his jab very well to both the body and upstairs. He’s a great counter-puncher, and knows when to press the attack while remaining defensively aware of return fire.

Sukhotsky at times has a difficult time of controlling range. There have been instances where he cannot find the suitable range to land his combinations thus giving him the incentive to close the gap, and throw punches while being at mid-range. The issue with this strategy is the fact he lacks the firepower to out brawl an elite fighter.

There is a reason why Stevenson is the heavy favorite to win this bout. He is the faster, stronger, more skilled, and experienced fighter. In every aspect of the fight game Stevenson appears to have the advantage. Stevenson should manage to stop Sukhotsky before the 12th round, possibly a 8th round stoppage. If Sukhotsky manages to pull off the victory, it would be the biggest upset of the year thus far.