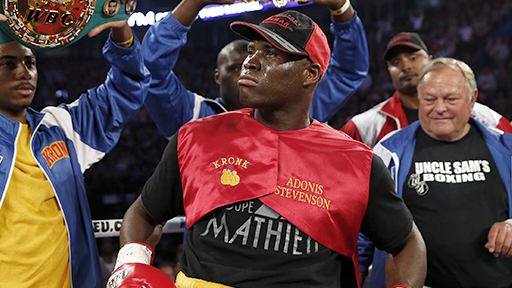 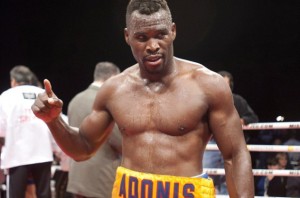 Stevenson captured the WBC light heavyweight title in 2013, a year he started off with a revenge knockout over Darnell Boone (the only man to beat Stevenson via second round KO) in March 2013. He then won the RING Magazine and WBC titles from Chad Dawson via first round knockout in June. Then he pummeled Tavoris Cloud in seven rounds in September and finished off the year with a sixth round knockout over top contender Tony Bellew.

However Stevenson is coming off of a disappointing 2014 where he fought only twice; once in a closer-than-expected decision win over Andrzej Fonfara (26-3, 15 KO) in May and a fifth round knockout over Dmitry Sukhotsky (22-3, 16 KO) in December.

The well of momentum has run dry for Stevenson, who makes his 2015 debut on the first CBS telecast of Premier Boxing Champions, April 4th at the Colisée Pepsi in Quebec City.

“I am excited to be the first Quebec boxer to fight in the PBC show, on CBS,” Stevenson said. “Furthermore: it happens in Quebec. It is fantastic.”

For those who want to see the light heavyweight dream match between “Superman” Stevenson (25-1, 21 KO) and “The Krusher” Kovalev (27-0-1, 24 KO), yet another obstacle has been placed in the way in the shape of the rugged veteran from Australia.

Bika (32-6-3, 21 KO) last fought as a light heavyweight in 2011, according to BoxRec, against Alfredo Contreras, 12-12-3 at the time, who Bika beat in three rounds. While many are looking past Bika to the Kovalev showdown, Stevenson’s trainer Javan “Sugar” Hill says his ward is focused on Bika.

“We don’t talk about Kovalev in camp,” Hill said, “Only about Bika!”

Hill has experience in the corner against Bika, working with super middleweight champ Anthony Dirrell when he fought “The Scorpion” for the WBC title in 2013 and 2014 respectively.

“With Anthony Dirrell, we did a draw the first time, and we won a decision the second time,” Hill said. “Bika is unpredictable and awkward. He hits from all kind of angles. Adonis must come back to the basics and punch well to win.”

Bika started his pro career in 2000, after competing in the Sydney Olympics that same year. His physique is mostly muscle and looks as tough as he is. The battle-tested veteran from Cameroon has lost mostly to the cream of the crop of the super middleweight division, including Joe Calzaghe (2006) and Andre Ward (2010).

“I expect a really long fight. Bika has never been stopped, and when he lost, it was always against world champions,” Stevenson said. “He is tough and he has heart. He was also a world champion. I will have to be patient, fast and move out of range to win.”

Hopefully, Stevenson will stay in range long enough to exchange with Bika and give fans a thrilling bout. However, Bika often charged in with looping one-two punches against Dirrell, which led to accidental butts and a lot of clinching. Stevenson’s stock might decline if he fails to win in spectacular fashion against a challenger from a lighter weight division.

“My dream is to unify all the titles and become the first fighter from Quebec to do so,” said Stevenson. “But I’m fully focused on Bika. I know he trains hard to steal my belts.”

If Stevenson truly wants to unify the belts, there is only one man he needs to see, Kovalev. The Russian “Krusher” holds three of the four major sanctioning body belts that include the IBF, WBA, and WBO. A fight between the two would be massive in a division that is usually outshined by the heavyweights.

It looked like Kovalev-Stevenson was on the horizon in 2014 before Stevenson jumped ship from HBO to Showtime through his manager Al Haymon. Before that, the two were on the same network (HBO), and a deal would have been rather easy to make.

After Stevenson had signed with Showtime, boxing insiders assumed he would get a shot at living legend Bernard Hopkins, who at the time held the IBF and WBA straps. Hopkins and Stevenson couldn’t reach a deal so instead Hopkins fought and lost to Kovalev on HBO, which put Stevenson in a sticky situation.

Once again, all roads lead to Kovalev for unifying the light heavyweight division. However, Stevenson is un-impressed with his rival who recently walked through haymakers and cringing body shots to stop former champ Jean Pascal (29-3-1, 17 KO) in eight rounds.

“Yes it goes through my mind, but I have to beat Bika, and he (Kovalev) has an IBF mandatory defense to do before it can happen,” Stevenson said. “And, to be honest, his performance versus Jean Pascal did not impress me at all.”

Perhaps Stevenson really isn’t impressed with Kovalev’s win over Pascal. But on paper, wins over Hopkins and Pascal look more impressive than wins over Fonfara and Sukhotsky. And with Bika having never been a real light heavyweight challenger, Stevenson needs to look “super” impressive to overshadow his nemesis.