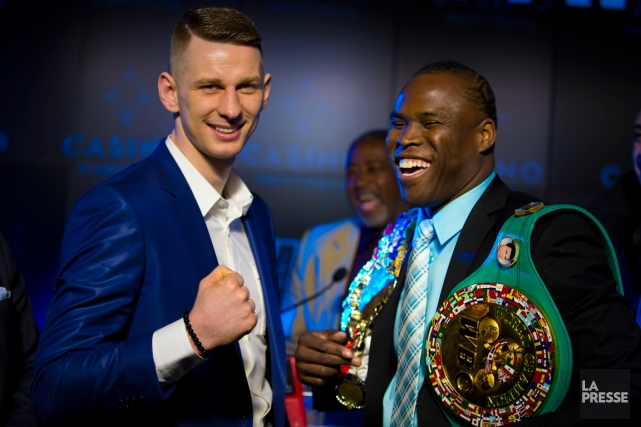 Adonis Stevenson and Andrzej Fonfara are set for battle Saturday night in Montreal for Stevenson’s WBC Light Heavyweight Title but there is so much more at stake for the heavily favored champion and should Fonfara win, he could take  Stevenson’s place among the top light heavyweights in the world.
If Stevenson wins then a possible showdown with Bernard Hopkins to unify titles seems inevitable especially with Stevenson signing with Al Haymon and Showtime, but Fonfara won’t let that happen without putting up a fight.
Comparing the fighters:
When you think of Adonis Stevenson you think power, especially with his destruction of Chad Dawson. Stevenson loves to come forward and will take shots to give a shot but the Haitian fighter can box as well like he demonstrated against Tavoris Cloud.
Stevenson may be at a disadvantage if Fonfara is able to keep his distance.
Andrzej Fonfara has what all fighters should have, a good jab. Should he be able to keep Stevenson at a distance and connect well, there is a chance he could land something big and put him down. Fonfara has demonstrated in the past that he can put fighters away.
The downside for Fonfara is he is facing Stevenson who seems unstoppable after suffering his lone career loss against journeyman Darnell  Boone back in April of 2010.
Prediction:
Fonfara will put up a fight but it will not be enough to hold off Stevenson. “Superman” will probably rattle Fonfara in the early rounds which will make Fonfara fight smart defensively and from the outside. He will have to be active because if he is able to go the distance then Stevenson should be ahead on the cards due to power shots and eye catching punches. If Fonfara takes it slow, Stevenson has displayed patience in the past and will eventually find his mark and take his opponent out. Stevenson will win via KO/TKO and will more than likely face Hopkins next or after one or two more fights.
Tweet