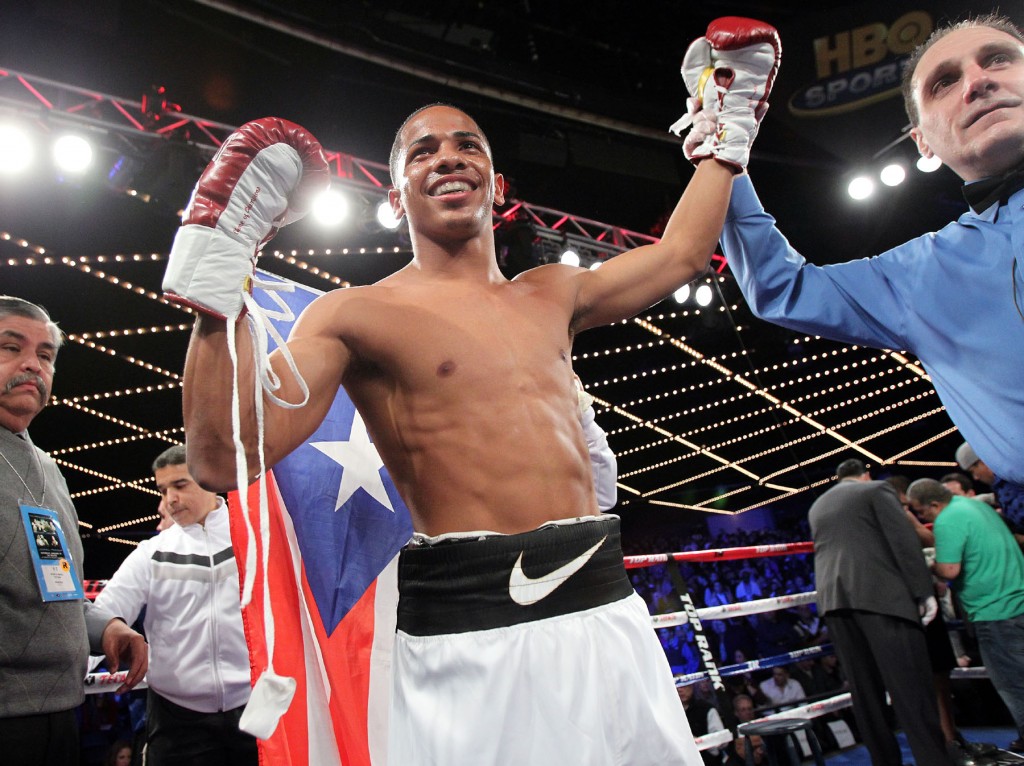 As part of the historic showdown between MIGUEL COTTO and SERGIO “Maravilla” MARTÍNEZ. on Saturday, June 7 at Madison Square Garden in New York, Miguel Cotto Promotions and Top Rank Inc., announced today that three top undercard fights will be televised live exclusively in WAPA 2 Deportes in Puerto Rico and Wapa America in the United States.

Verdejo (12-0, 9 KOs) of San Juan will take on Engelberto Venezuela (9-1, 3 KOs) of Mexico in a six-round lightweight bout, Lopez (12-0, 10 KOs) of Carolina, Puerto Rico the WBC Fecarbox Super Bantamweight champion will take on Raul Higaldo (21-10, 17 KOs) in an eight-round title bout and Ortiz will make his debut against Elio Ruiz in a four-round flyweight bout.

“We are very happy to present these bouts, which will feature some of the top prospects from Puerto Rico, on Boxeo Boricua on WAPA 2 Deportes in Puerto Rico and WAPA America in the United States. This historic telecast will be enjoyed by all Puerto Rican fans,” said three-division world champion Miguel Cotto.

“Top Rank is delighted that together with Cotto Promotions we can arrange for WAPA to televise the fights leading up to the Pay-Per-View telecast at 9 p.m. on June 7. The Puerto Rico audience for the first time will be able to see on WAPA the young stars of Puerto Rico,” said Bob Arum founder and CEO of Top Rank Inc.

“We are excited to be able to provide this historic telecast to all the great fans of Puerto Rican Boxing through WAPA 2 and WAPA America so they are able to follow the future stars of Puerto Rican boxing from a great venue like Madison Square Garden,” said Héctor Soto, Vice President of Miguel Cotto Promotions.

The three bouts will also feature the great Puerto Rican and Mexican Rivalry, adding even more heat to the telecast. The three Puerto Rican prospects will have their hands full as they battle strong opposition.

“I am very excited that everyone in Puerto Rico will be able to see these fights from New York live on the same night that our great champion Miguel Cotto will be looking to make history, and one day before my childhood idol Felix “Tito” Trinidad is be enshrined in the International Boxing Hall of Fame. I know we will have great support in the stands and I feel blessed that I will have the opportunity to show my talent in the most famous arena in the world, Madison Square Garden,” said Verdejo.

“It’s a great honor to be part of this tremendous show from Madison Square Garden and I am very proud that my fight will be seen live in Puerto Rico on this historic telecast,” said Lopez.

“This is a great opportunity for me and I feel very grateful to be making my professional debut in such historic arena on a historic night of boxing. The fact that my first professional fight will be seen in Puerto Rico will also make June 7 a very special night,” said Ortiz, who represented Puerto Rico in the 2012 Olympic Games in London.