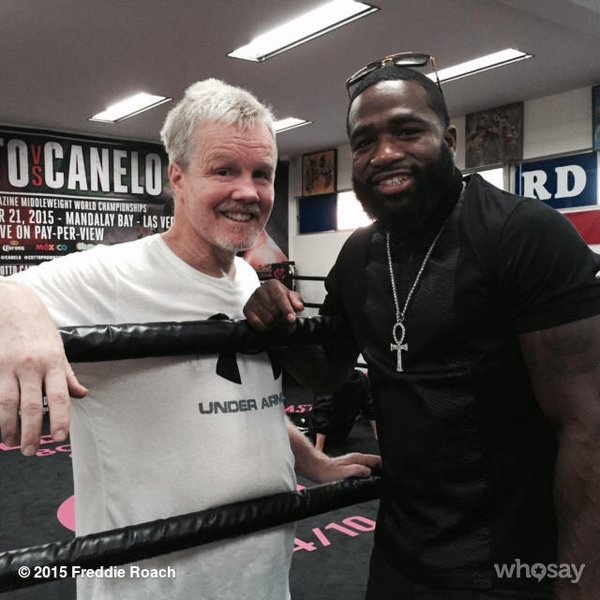 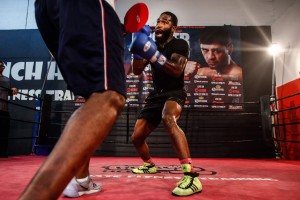 One of Adrien Broner’s nicknames is “The Problem,” however the tables have turned due to the fact that he is now the one who has a problem: he can’t handle pressure fighters. Whether this is Broner’s corner’s doing or if it is simply just mental for Adrien, but one thing is for sure, he needs a change, and Freddie Roach may be the change that is ever so needed.

In an article with Tim Fletcher of boxingnews24.com, the possibility was speculated after a picture surface on Roach’s twitter of Broner visiting him at the Wild Card gym, far away from Broner’s home state of Ohio.

The old expression opposites attract relates ideally to this case, as Roach and Broner are completely opposite in almost every aspect. Freddie is a no nonsense type of guy when it comes to training, and we have all seen pictures of AB when he does not have a fight scheduled.

You could say he doesn’t take after “Big Bro” in that aspect. Anyways, the one thing that most of Freddie’s fighters have in common is discipline. Freddie to me is more than a trainer, he’s a teacher.

You can argue that there is no better life coach/trainer in the sport of boxing today than Roach, (Emmanuel Steward held that role too many before he passed.)Not to take away from his ability as a trainer, but Freddie understands what it means to be more than a trainer.

Freddie isn’t afraid to tell his fighter that he’s not looking so good during a fight, or to simply just tell him he’s not as great as he thinks he is during a training camp, but then telling the media how unbelievable you’ve looked in camp. Broner needs someone like Roach.

It would be overdramatic to say Broner needs Roach, as there are plenty of other trainers who may benefit AB just as much or even more than Roach potentially can, but Freddie makes sense. It can be argued that Adrien has gotten too complacent in his corner which features his dad and trainer Mike Stafford.

Sometimes a change of surroundings is just the thing you need, and it may be time for that. Freddie would push Broner and embrace him, heck he could even claim the throne of Freddie’s heralded “new favorite fighter,” an accolade that has recently been awarded to Viktor Postal.

Let’s be real, Broner throughout his entire boxing career was told how special he was, and how he was the next big pay per view star, and how he would follow in the footsteps of his mentor Floyd Mayweather.  Yet, all the Broner haters out there can’t ignore this simple fact: he just turned 26 and it is not too late for him to be a pay per view star at some point in his career.

As the great Roy Jones Jr. would say, “Ya’ll must of forgot” just how big Broner was from a star power standpoint and how highly praised he was before that Maidana fight. If he won that fight, his next fight very well could have landed on a pay per view headlined by “The Can Man” himself!

Another thing Roach does that could benefit and maybe wake Broner up, is the fact that Roach has been known to cut fighters, something that is done by organizations in team sports such as football and baseball.

Freddie specifically cuts fighters who are not dedicated and who do not work very hard. Adrien would really benefit from working out, not just when he has a fight scheduled but year round. Guys such as Miguel Cotto and Manny Pacquiao are always in shape, even when they are on vacation or taking a break. AB needs to have this year-round work ethic.

Whether these two stars of the sport will ever link up can be speculated and speculated till either AB is no longer boxing or till Freddie is no longer training but one thing is for sure: The picture of Broner with Roach at the Wild Card gym is suspicious to say the least, yet it is just as intriguing at the same time.